This ~4hr session was a nice mix of exploration, role-playing, and tactical adventure. Sadly, we also had our first PC death: Sproutface – the only lawful PC in the group. The party found a large treasure stash, including several MU scrolls. Interacting with Loomis, the spurned apprentice, and Little Chief, the captive goblin, brought more clues regarding the nature of Morton’s sidetracked project of reviving a dead godling. With this game we also began playtesting a new Beastmistress class, where advancement leads to gaining special animal-related abilities (inspired by the Gamma World mutation system). 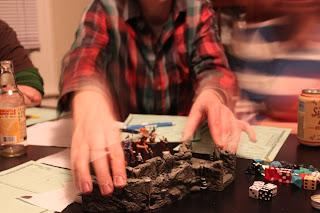 Loomis – Level 1 MU, came to ask Morton for an apprenticeship, and rapidly ended up in a floating sphere of Vaseline. 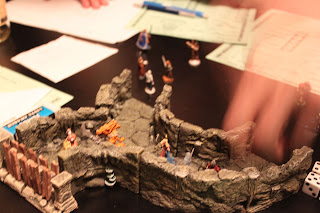 Magical Meconium of a Godling: The party is two levels below ground in a large chamber dominated by a 50’ long stone tub holding a gigantic human head with a tiny limp body floating in oily brown bathwater that smells like meat. Large prisms and lamps, dark, on swinging arm apparatuses flank the tub. Monolaba dips his finger in the brown liquid and tastes it… ‘tase good! A weird high pitch telepathic voice asks Monolaba if he enjoyed the godling’s meconium. Franklin fails a save against spells and is charmed by the voice, who asks him to please feed the head using the crystal hand (see session 1). The brain in the giant head is messing with the group. Cookie restrains Franklin and pulls him into a southern chamber…
Stasis Gel Orbs: A small room with two floating gel orbs and a pool of water with a waterspout going into the ceiling. From each gel orb are rescued two more prisoners of Morton: Beana and Loomis. Much cool first-person role-playing ensued as Beana and Loomis explained how they were each captured by Morton, and what they know about the place.
Water and the Fungus Heifer: The party heads further south into a series of fungus caverns. They pick samples of various species of mushrooms – Purple Chanterelles, Lace Morels, Yellow Roaners, etc. Monolaba took a taste of a Purple Chanterelle and didn’t notice any immediate effects. Exploration and mapping brings some notable discoveries: large ancient statue of amoeboid creature, a small stream falling into a dark cavity, a large shy fungus beast with black ascomycetic eyes retiring in the back of a cavern.
Blood, Gore, Goblins, and Rats: A fairly complex series of encounters occurred where the players learned how to gain access, through a portcullis, to an eastern set of tunnels inhabited by hostile rock goblins. A series of gnarly back-and-forth tactical fights through the tunnels occurred. No characters died, but some were left unconscious or were seriously wounded. Scunibro’s sleep spell helped finish off a good portion of the goblins, and the party took one captive for questing. The little goblin said that the troupe was hired by Morton to help defend and maintain the caverns, and that there were many more goblins remaining. The party set up camp in an easily defendable room for the night. The party was interrupted once in the night by a pair of large rats who were quietly watching the party from the edge of the firelight. Beana spoke with the rats, who said that the goblins were mostly killed (in contrast to the captive’s story). The rats departed, and the party was able to get some rest. 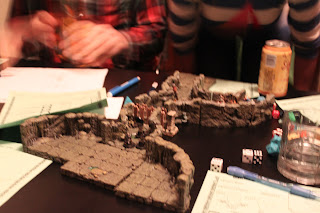 Grod the Magical Goblin and the Deaths of Sproutface and Mess: The next day the party reentered the Goblin cave to try to finish off the creatures. While the party was distracted by a screaming goblin, Grod the Magical Goblin Chief snuck up from behind the party and cast a sleep spell, laying most of the group on the ground. Only a couple players, in a side tunnel, remained awake – they ran as quickly as they could to awaken their companions and attack the small group of goblins now ambushing the party from the other side of the cavern. Ultimately two party members had their throats slit and died: Sproutface (the only lawful PC) and Mess. The party killed off all the goblins except for one, whom they christened “Little Chief” because they promised to reward him the control of the newly emptied cavern in exchange for his assistance. The party looted the goblin’s supply room and Grod’s personal chamber, where they found some of Morton’s scrolls and fine valuables.
So back to town the party headed with the corpses and the treasures…