A mind-blowing photo from the Mars Reconnaissance Orbiter. I love Mars.
CLICK TO ENLARGE 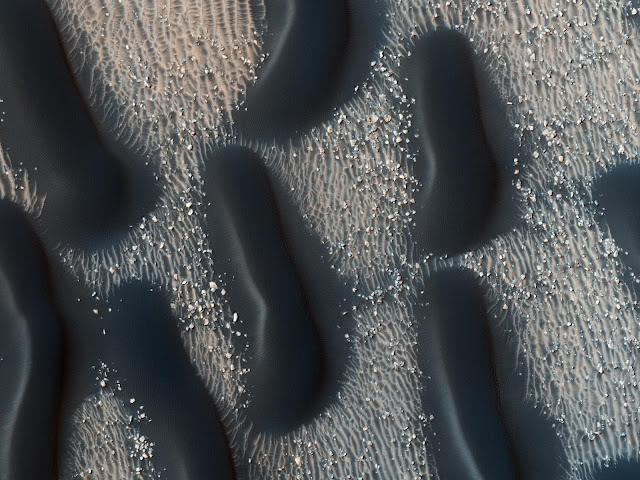 Obviously I haven't been posting much lately. A glass of water got spilled on my computer at home, so I was out of action for a while. On top of that I've been unusually busy with work. I may not be posting much until after the holidays.

Horror in the Sandbox I: Learning From Failed Runs of Raggi’s Modules

I like creepy and cosmically horrific kind of stuff. Like a lot of DMs, however, I've had problems in the past with getting players to make the stupid decisions that would lead them into creepy and cosmically horrific situations. How many of you DMs can recall sessions where you designed an awesome creepfest, only to have the players (wisely) get the hell out at the first sign of weird danger? It's hard to fault players for this kind of reaction, really - I can't blame them for not wanting their characters to step into an uncontrollable situation that would likely result in death. This is especially a problem in more sandboxy campaigns, where the players always have the choice to move on. Obviously, this is less of a problem in railroads or one-shots.

It's been very interesting over the last few months to read reports of players reacting exactly like this to the new horror-themed Lamentations of the Flame Princess modules. When some experienced DMs have tried to integrate modules like Tower of the Stargazer or Death Frost Doom into ongoing campaigns the players got wise pretty fast and turned tail, either leaving the module unplayed, or forcing the DM into railroading mode. Here are some quotes:

“With the quick death of their new hireling just entering the tower, they knew that this was a deadly place. After exploring the second level of the tower, they made their way up a flight of stairs, discovering some blood trickling out of a keyhole. They checked for traps but remained uncertain about what to do next, when Wagstaff commanded Olav to try the door. Olav the Dwarf was afraid after seeing what had happened to the last guy, and declined. The porter, poor fellow, was asked and also declined. Wagstaff suggested they all draw lots, but the porter didn’t want to be included. He finally relented that he would include himself in a drawing for a large bonus sum. This was too much for Wagstaff and they decided to call off the whole business, leaving the tower!"
- ze bulette on running Tower of the Stargazer

“They wanted nothing to do with the site, with its treasure, or with any investigations thereof. It seemed like the stupidest idea in the world to go anywhere near the place, and they only did because I railroaded them.”
- Alexis on running Death Frost Doom

“I'm a little late to this thread, but I found that I had the same experience with The Grinding Gear. The party took one look at situation and wanted to keep on trucking.”
- Blaise in response to Alexis’ post

“Ironically, Raggi's 3 Brides does a better job of providing the motivation/plots than his other modules. You have to work really hard to integrate his modules, almost rewriting them in terms of plot/story to make them work.”
- ChicagoWiz in response to Alexis’ post

“The "motivation" part of the module (of all my modules, really) is intentionally vague, because the point of a module is to be integrated into the whole of a campaign, not stick out like a sore thumb...”
- James Edward Raggi IV in response to Alexis’ post

Alexis' original post at the Tao of D&D was a stinging criticism of Death Frost Doom at many levels, but most of the post's comments dwelt on whether it was the responsibility of the DM or the module writer to provide the motivation for PCs to walk into deadly and nightmarish situations. My opinion on the matter is that, while ultimately it is the DM's responsibility to make a campaign fun and thematically compelling, if someone is going to charge money for a module they should at least provide some options for the DM to work with in terms of motivation - treasure, escape, stopping a threat, whatever... For instance, I can write an old school location-based module called Nebraska, but what's the point if there's no compelling reason to run an adventure there? I think the challenge of writing a location-based module is inventing a place that is interesting and rewarding for players to visit. The players should WANT to go there. So how do you cultivate this kind of inherent motivation while also adding horror to the mix?

I pose the question:

How do YOU motivate players to willingly walk into weird and horrific situations?

I have some of my own playtested ideas I'll outline in a subsequent post, but I am curious to hear about experiences and insights from anyone else who has thought about this.

One of the huge appeals of 4e is that it's more than a game - it's a self-contained gaming community. Sure, that community is run by an unresponsive dictator in Washington (state, that is), but it is undeniably cool that you have the option of porting your character between Encounters run by different DMs all working in a shared universe. It's also nice to know that if a game store is nearby you'll always have gaming buddies at least one night a week. This is pretty awesome actually.

Things have changed slightly in the last few days, however. Now if you want to build and maintain a D&D character you will be required to subscribe to the online D&D website. It appears that the dictator has now started charging taxes! The 4e tax!

Accordingly, cries of anguish have been erupting from the blogs and forums in response to Hasbro / WotC's announcement that they will no longer be supporting their downloadable stand-alone character building software. If you want to build an official D&D 4e character you now have to use Hasbro's online D&D Insider subscription service. Greg at Weirdlands of Xhuul has posted more details and advanced screen shots here.

For those of us who like more traditional pencil-and-paper RPGs the obvious response is "So what? Can't you still use your old books, roll up your own characters, and just play?" Apparently things aren't that simple... When I posed the question to WickedMurph of the Over the Misty Mountain blog he said:


Well, the problem here is that you really kinda DO need the online tool. They have released so much errata and shit that the Character Builder is pretty much the only way to keep it all straight.

What's more annoying is that Character Builder is still a good way to release rules. All the things I said about it before are still true - it's a cheap, effective and unprecedented way to publish a game.

I don't really play 4e so none of this directly affects me, but I think it's very interesting to watch "D&D" evolving under Hasbro. It's fascinating how what was once a simple pencil-n-paper roleplaying game is now evolving into a totally novel sort of online fee-based gaming service. Between maintaining compatibility with formal Encounter "league play", dealing with complex rulesets, and keeping up with errata and rule updates players are pretty much forced to buy into the online subscription service.

The surface of the sun. From the NASA APOD website - one of my daily reads...
I HIGHLY RECOMMEND YOU CLICK THE PHOTO TO ENLARGE 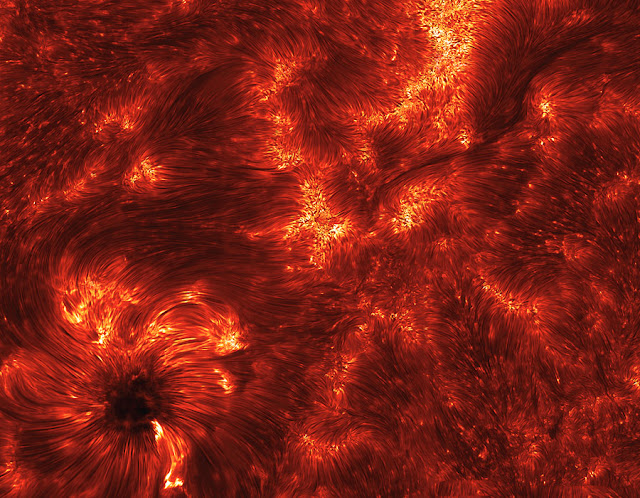 Spicules: Jets on the Sun

Credit: K. Reardon (Osservatorio Astrofisico di Arcetri, INAF) IBIS, DST, NSO
Explanation: Imagine a pipe as wide as a state and as long as the Earth. Now imagine that this pipe is filled with hot gas moving 50,000 kilometers per hour. Further imagine that this pipe is not made of metal but a transparent magnetic field. You are envisioning just one of thousands of young spicules on the active Sun. Pictured above is one of the highest resolution image yet of these enigmatic solar flux tubes. Spicules line the above frame of solar active region 11092 that crossed the Sun last month, but are particularly evident converging on the sunspot on the lower left. Time-sequenced images have recently shown that spicules last about five minutes, starting out as tall tubes of rapidly rising gas but eventually fading as the gas peaks and falls back down to the Sun. What determines the creation and dynamics of spicules remains a topic of active research.

In response to requests I've received, here is an updated listing of 234 old schoolish roleplaying blogs ranked by follower. The follower numbers are from 1 November 2010. You can find links to all of these blogs HERE.

My usual blogometric caveats apply: (1) This list only has blogger.com blogs because follower numbers are not publicly available for WordPress blogs. (2) Yes, I know some blogs are missing. If your blog is not on the list and you want to be included next time, please send me the link. Sorry, I won't go back and update this post when I receive new links! (3) Blogroll aggregator sites were not included.


Blogs left out (due to error or late update). Sorry 'bout that!

Out of respect to our friends using WordPress, here's a list of excellent RPG blogs I was unable to rank:

Here's a list of 216 old school roleplaying-related blogs ranked by the number of followers they gained in October. I am ranking blogs using this system - as opposed to raw follower number - in order to determine which blogs are "hottest" without being biased by how long a blog has been around.

I am pretty excited about this list because unlike my last effort it has a ton of data for newer and less well-known blogs. My main motivation for making this list is to highlight the blogs that are currently attracting the most reader attention irregardless of the blogs' age.

Congratulations to Evan (In Places Deep) and Loquacious (World of Wonder) for rocking the blogosphere so hard over the last month! Keep it up!