Pictures of the four prepainted miniatures representing the pregenerated characters in the new Pathfinder Beginner Box have been released. The detail on these prepaints is absolutely stunning. Unfortunately the anime-influenced stylings of the minis are not much to my personal liking. Wizards that look like steroid-injecting professional wrestlers just don't quite fit into my world. I'll stick to my old lead for now... I dig magic users with pointy hats, thieves with lanterns, and hobbits with hash pipes. 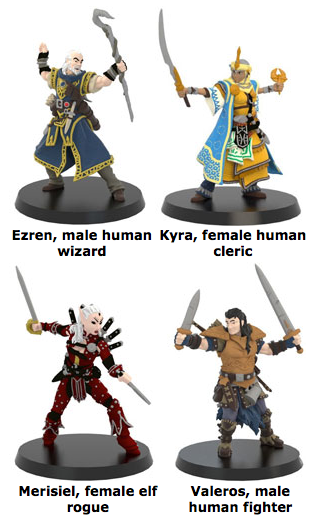 Here are some fascinating examples of real Ge'ez clerical scrolls from Ethiopia. They are currently on display at Elizabeth Street Fine Arts gallery in New York City. The gallery website has pictures and descriptions of several scrolls dating to the 19th century, although some extant scrolls date back to the 16th century. Most of the scrolls described on the website contain multiple spells related to protection and healing. It's striking to me how many of these spells are recognizable from our favorite fantasy roleplaying games. It's also interesting how many Ge'ez spells fit onto a single scroll.


So called “Magic Scrolls” are long rolls of parchment, illuminated by talismanic and figurative images and texts, usually in Ge’ez (Ethiopian liturgical language), of protective prayers, invocations of secret names of God, or sometimes demons. They are produced and used for varied purposes, healing, protection from spells, exorcisms etc. Scrolls are referred to as “ya’ branna kitab”, “written on skin” in Amharic, “asmat” or “names” in Ge’ez or “ta’lsam”, “talisman” in Tigrinya.

Scrolls are made for a specific individual by  “dabtara” (an unordained “priest” who studied scriptures, singing and poetry, a practitioner of traditional medicine, magician) and are carried and used by that person extensively. They rarely survive through a few generations of use. The oldest known scroll is recently dated to16th century, while majority of great surviving scrolls date between late 18th to early 20th century, as do the scrolls in this exhibit.

Here are some magic scroll pictures. More thorough details, which I paraphrase here, are available at the original website:

Tigre magic scroll. Three sets of incantations: (1) "The Prayer or Legend of Susenyos, used for the protection of children and infants from illness, followed by an invocation of magical names for the protection of the scroll owner from demons.", (2) "prayers for protection from the demon Shätolay, blacksmiths, buda, etc.", (3) prayers against rheumatism and stomach ache.

Fastest Growing OSR Blogs of April and May: GAIA GAMMA and GROGNARDIA

Here's a ranked list of 245 old schoolish roleplaying blogs ranked by the number of followers they gained between April 1st and June 6th. I rank blogs using this system - as opposed to raw follower number - in order to determine which blogs are "hottest" without being biased by how long a blog has been around. My main motivation for making this list is to highlight the blogs that are currently attracting the most reader attention regardless of the blogs' age. Out of respect, I DO NOT list blogs with zero or negative growth.

My usual blogometric caveats apply: (1) This list only has blogger.com blogs because follower numbers are not publicly available for WordPress blogs. (2) Yes, I know some blogs are missing. If I am following your RPG blog as of today it should be in the next ranking. If your blog is not on my list and you want to be included, please email me the link through my profile. If I made a mistake please let me know - I am not consciously trying to exclude anyone.

Tied for first we have Grognardia and newcomer Gaia Gamma! I assume that I don't need to describe Grognardia to anyone - it's consistently one of the biggest, fastest growing, and most influential blogs in town. Gaia Gamma, on the other hand, is a new blog focused primarily on creative content related to propietor Thomas Biskup's post-apocalyptic RPG design. Fans of games like Gamma World and Metamorphosis Alpha should love this blog. Great great stuff!

In second place we have another newcomer: Grognardling! This blog is all about straight up old school D&D and is remarkable because it is one of the few blogs written by a younger gamer who didn't actually grow up playing the game.

Here's the whole list. You can link to any blog by clicking on its name: