Horror in the Cloud Mines

This is the first time I’ve taken a group of players through the cloud mines. It seems to have gone quite nicely, although some aspects of the adventure induced a bit of timidity in the group. The cloud mines are basically an upside-down floating labyrinth, the individual levels of which are separated by cables that can be transversed by enclosed cable cars. Each labyrinth level is an independent swaying, creaking, levitating enclosure that is attached to the ground hundreds of feet below by a cable. The cloud mines float in a thick opaque mist that induces fearsome hallucinations unless special precautions are taken. Several of the floating levels act as distilleries that extract magical fluids from the opaque vapours – hence, the cloud mining. These distillery levels have large complex glass machines with apparatuses extending deep into the vapour banks outside the enclosures. 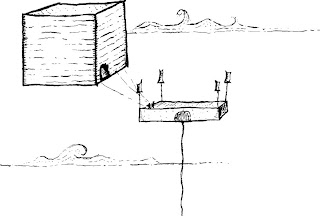 PCs: Philina (level 2 cleric), Chipwich (level 2 thief), Syeth (level 2 MU), Alia (level 2 fighter)
NPCs: Merryn (level 2 cleric)
Return to Penelia: The party has now relocated to the small deep-forest hamlet of Penelia, home of the animist Penelion Sisterhood, to which Philina and Merryn belong. The sisters tend to a large ancient owl living in a Venusian-sized tree to the west of the hamlet. Unrest in the southern range of the forest led the matriarch of the Sisterhood to urge the party to investigate a haunted glen in the mountains foothills to the south. It has been observed that troupes of small blue-skinned eyeless humanoids have been traveling in and out of the glen in recent months. This glen was the site of a massacre eons ago, and those who enter the glen return insane or are lost forever.
The Glen of Opaque Vapours: The party finds the entrance to the glen and camps out nearby to keep watch through the night. Shortly after dusk a man runs out of the glen and Alia catches up with him on her horse. The man, Hyne, says he’s an explorer as well, and gives some background about what he knows is in the misty glen. For reasons that are mysterious, a floating cloud mine has been constructed in the vapours by a Cinnabar Witch. There are apparitions in the vapours that will drive you mad if you look at them. Hyne has built a pair of fine-slit blinder goggles that aid in traversing through the vapours. The party heads back to town for the night, and some role-playing with Hyne, the party, and the locals ensues. The next day the party agrees to return to the mines with Hyne, and they hire local craftsmen to make slit-goggles for the whole party.
Through the Vapours: The party returns to the glen. As they follow a footpath deeper into the mists, the vapours begin to take a scarlet hue. Rotten figures shamble about the group, threatening mystic fear. Philina uses her blessed bandana (magic item from several sessions previous) to resist the fear. The group finds a stone structure with a ladder leading to a platform. There is an enclosed wooden car on the platform attached to a cable leading directly up into the blood hued vapours.
Into the Cloud Mine: A crank moves the car hundreds of feet up the swaying cable until a thud halts the car’s movement. The party exits the car through a hatch in the ceiling and find themselves in a wooden room – they are in the entry chamber for the floating cloud mine. The group explores this level of the mine (I’m not providing too many details here…) and finds living quarters and mangled corpses of the eyeless blue men – mineworkers apparently. The group is attacked by, and barely defeats, a gaggle of horrific wild beasts – large chimpanzee-like creatures with transparent skin - that appear to have invaded the cloud mine. The group eventually finds some special glass goggles that prevent the hallucinations of the vapors. They also find a shrine to a Cinnabar Witch and a cable car leading to a distillery level of the mine. Two members of the group make a quick trip to the distillery level, take some vials of red sticky vapour distillate, which they conceal from Hyne, and return to the party on the first level. The group then leaves the cloud mine and heads back to Penelia.
(NOTE: I still owe players a recap of Sessions 4-11)