Fungus caverns are a classic archetype of weird fiction, and have accordingly been incorporated into fantasy roleplaying environments since the birth of the hobby. Although many DMs treat fungus caverns simply as colorful backdrops for spelunking, it is not unknown for some players to want to take a closer look at the mycological wonders surrounding them. To better serve these supernaturalistic gameplay moments, I here begin a series of reports providing some rudimentary details on the ecology and diversity of common subterranean fungi in the world of Oranj.

Consider the mushroom… It is only the transitory fruiting body, the fleeting flesh flower if you will, of a more cryptic and expansive organism that resides in the soil. The main part of the organism is in fact the mycelium – a neural net of fibrous aspect that may extend for inches or miles. Some fungi of Oranj have mycelia that extend not only through the earth, but also across several obscure dimensions of space. 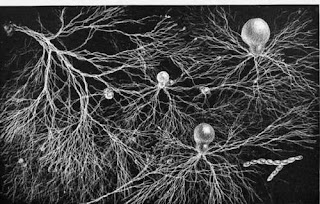 The defining feature of a fungus cavern is the nutrient source of the resident fungi. The fungi of the surface world typically live on decaying organic matter. A paucity of sunlight in subterranean regions translates into a lack of plant matter, which in turn means that there is very little decaying organic stuff to sustain forests of mundane fungi deep underground. The great fungi of the inner sphere instead rely on more unusual strategies for survival:
1. Mycocultural Tracts: Underground mushroom farms are actively maintained by fungus feeding lifeforms. To support this type of agriculture organic material is actively brought into the caverns and applied to the mushroom gardens. The constitutive fungi are usually benign, sometimes delicious. Mushroom farms are usually indicative of a local subterranean agricultural society.
2. Filth Springs of the Inner Sphere: On Oranj there are poorly understood underground reservoirs of organic filth that occasionally bubble through into caverns. These springs of filth often form ponds or lakes of thick oily sludge that can support large patches or even floating islands of fungus. Some of these fungus islands are quite large and ancient, manifesting as massive floating mushroom forests in the deepest caverns.
3. Calxomyces Galleries - Stone Eaters: Certain Oranjian fungi are capable of feeding upon rocks and minerals. Most common of these "stone eater" fungi are the carbonophilic calxomyces. The mycelia of these fungi spread through caverns, actively breaking rock in order to gain access to veins of coal or similar carbon-rich sediments. This bizarre feeding strategy has lead to the creation of vast cavern systems throughout the planet's crust. The multichromatic mycelia of calxomyces can completely cover the interiors of active feeding caverns, producing an otherwordly environment where sensitive travelers can telepathically sense the thoughts of the mycelia. Calxomyces fruiting bodies are large black and purple morel-like growths.
NEXT POST:
Flesh Eating Fungus Nests
Mycelial Brain Cysts
Interdimensional Sporulation Patches
Undead Fungus