There was a question about the art in my last post. It was by Fuyuko Matsui. Here's more: 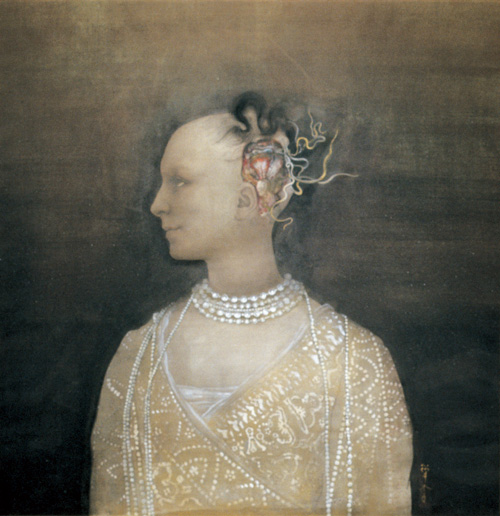 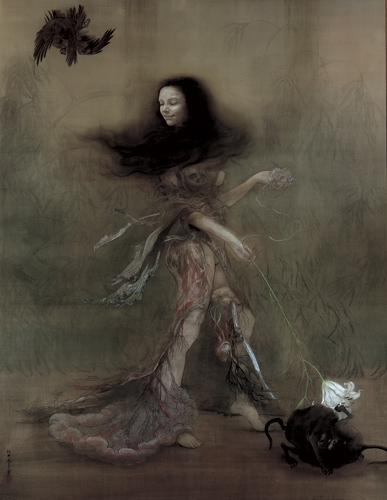 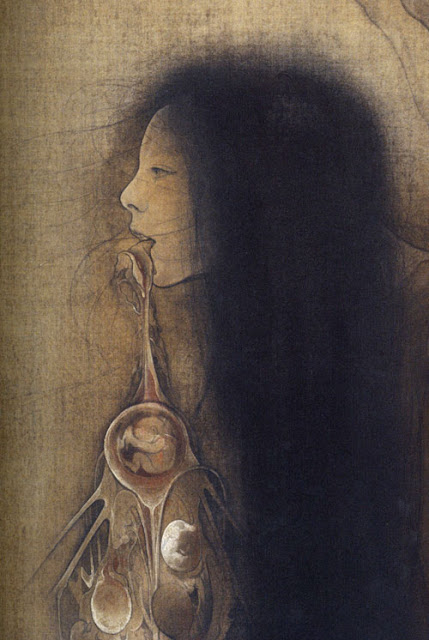 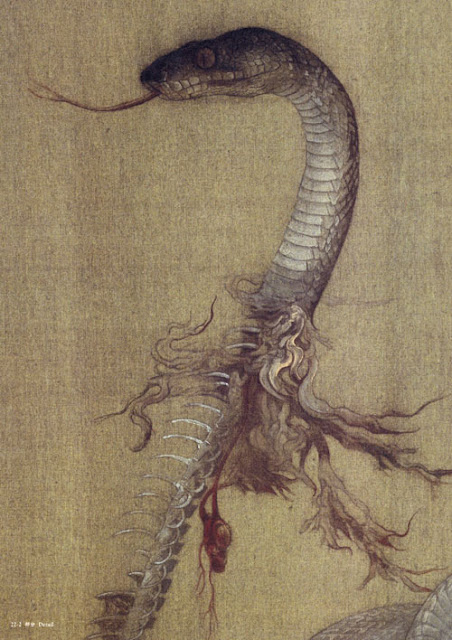 We Feed on the Flesh of Referees and Ghosts

Behind the screen I sometimes pretend to do things while a neglected part of my mind thinks up something to say. I have to remember so I write it down on green graph paper. Players feed on my nerves or sometimes sleepwalk. Referees are exposed like children who don't know what all the words mean yet. You can be gentle or you can pick at their giddy flesh to see how deep their dreams go. Do you really know what the teeth of a monster feel like? Did you hear that you can see stars in the glossy gall extracted from the splijossum of an ancient space wizard? 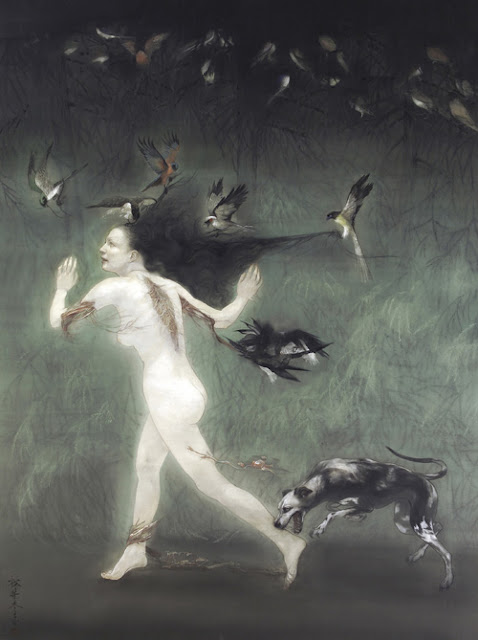 There is no question or ambiguity. Pathfinder is now consistently outselling Dungeons and Dragons. ICv2 just releaed RPG sales ranks for Summer 2011:

This follows on the heels of identical results from the previous quarter:

A cursory browsing of blogs reveals the first appearances of old-school gameblogging before 2009:

Let me know if you can think of any other pre-2009 old school gameblogs.

I don't know why I am compelled to undertake these tedious blogometric exercises. I think it reflects some sort of personality disorder I have.

Hiatus, Not Fizzle... Maybe a Trickle?

At a Halloween party last weekend someone was asking about my blog. I said I hadn't really been keeping up with it lately. Why not? Says I "Well, I'm going up for tenure this Fall, you see, and I've been pretty busy trying to get nice research articles out to hammer down my case. Well I got my tenure review file in and things look good, so now I'm hoping that I'll have a little more time for gaming related stuff. I'm still pretty busy, so don't expect a flood of posts, but hopefully something more than nothing..."

Along with the blog my campaigns have pretty much been on hiatus since summer. I'm calling it a hiatus, not a fizzle...

The Penelion campaign reached a nice chapter-closing point when the party made it to the top of the cloud mine and met the renegade alchemist who was obsessed with eating cumulonimbical crystals and playing organ music for the translucent cloud beasts. The party gained access to a floating wooden cube maintained by the alchemist. Because of all the babies us players are having it's hard to see this group of players getting together again on a regular basis for quite some time. I don't want this campaign to fizzle. I like it. So maybe it's time to think about recruiting a few other players...?

The World Oranj campaign also reached a nice chapter-close before one of the key players moved to Taiwan. The party made it to the hanging ceramic city of Wiggin's Drop. Maybe I'll tell you more about it some time.

Here's hoping that in the next few months a little more cyclopeatronicism will start trickling out...

As is probably the case for a lot of you out there, Jeff's Gameblog and Grognardia are the first blogs I ever read that focused on old school D&D. I still love both of these blogs - they just keep going and going and going and are filled with a lot of great content. They are also supposedly two of the oldest gameblogs on the block and I don't think anyone would argue the fact that they've played an important role in shaping our collective view of the Old School Renaissance.

To better understand the origin of OSR blogging a while back I did some archive snooping to see how Jeff Rients and James Maliszewski (of Jeff's Gameblog and Grognardia, respectively) originally got into writing about old school gaming.

It turns out that Grognardia grew out of a LiveJournal blog called "The Schizonomicon: Musings of a Sleep Deprived Dad". Maliszewski started writing this blog in 2002 and it was initially filled with posts about very personal non-gaming issues. Starting around 2006 a significant amount of gaming content started popping up but it was almost all about modern RPGs and/or Maliszewski's creative projects (e.g. Thousand Suns).

It was January 10, 2008 when, as far as my skimming reveals, Maliszewski made his first post dedicated to Original D&D. It was two sentences long and titled "Things I Learned From OD&D". This post was rapidly followed by a succession of OD&D-related posts including the classic "Kill the Cleric":


"Lest anyone think my respect for gaming tradition prevents my being an iconoclast when warranted, I offer you this: D&D would be better off without the cleric.... If, as I contend, D&D is primarily a game of pulp fantasy and if you want, as I do, to see it return to its roots in a powerful way, there's really no choice. The cleric must go."

By March 2008 Maliszewski had started Grognardia to focus on OD&D-related material and The Schizonomican was shuttered by October. In sum, it appears that the seeds of Grognardia were planted in early 2008 and really only grew into a dedicated blog in mid-2008.

Now let's look at the origin of Jeff's Gameblog. Rients started blogging on February 25, 2004 on tripod.com. From day one his blog was called Jeff's Gameblog and was completely devoted to gaming. On his first day of blogging Rients is talking about 80s RPGs including D&D Expert Set, Call of Cthulhu, and Heroes Unlimited. As far as I can tell this is the first glimmer of retro-RPG consciousness in the blogosphere (please correct me if I'm wrong).

If there's anything I can discern about the evolution of Jeff's Gameblog over the last 7+ years it's that the early exclusive focus on games gradually expanded to include more general retro pop/geek-culture material, especially 1980s stuff.

So what does this all mean? Probably not much, but I do think Jeff Rients deserves a ton of credit for being one of the true founders of OSR blogging. Probably the first, in fact... by a long shot...

This summer I played in an AD&D game run by Erol Otus at the North Texas RPG Con. Erol has always been one of my favorite fantasy illustrators and the Fantasy Arts Enterprises gaming supplements he published in 1979 (Necronomican, Booty and the Beasts) are some of my favorite gaming materials ever. Period.

Well it turns out the Erol is an exceptionally great DM. As great as you would hope if you're a fan of his art style. Playing with him is like walking into one of his weirdest and most whimsical paintings. For me the experience was like being in gaming heaven, really. Erol even has a homemade screen covered with his art (that's Tavis Allison peeking over Erol's arm, by the way): 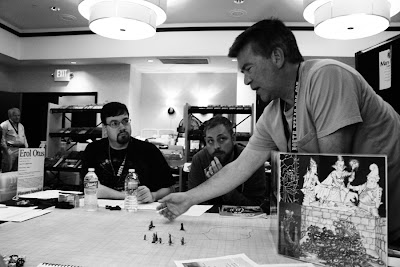 The eight-hour session we played in was a test run of Erol's new module Island Town. All players are descendents of a shipwrecked crew of humans, dwarves, and halflings living on an isolated island. You can play any of these races, or you can play a hybrid called a "Moojongi" and choose which body parts you want ascribe to which pedigree! We all started at Level 0 and began the game by harvesting Hazu bulbs in the lower levels of the islands. You see, young residents of the island have to prove their worthiness to ascend to the breeding chambers in the upper island by spending several seasons making fermented Hazu cakes. This manifests as a series of competitive semi-strategic dice rolling games between teams of players. The whole process was so beautifully and poetically described by Erol in terms of the ancient traditions of blade wielding, injecting, and cake rolling - it's hard to describe the creative genius of the whole thing.

Erol explains some nitty gritty: "Here on Island Town a "0" level gets but 2D6 per stat.  You will add 1D6 per stat for each significant encounter/achievement/discovery becoming 1st level after each stat reaches 3D6.  Normally citizens achieve a 1D6 addition to a stat. after the yearly Hazu Harvest thus becoming 1st level 6 years into the 10 year stint of harvesting duties. "

This is a great mechanic. As a reward for achieving various tasks (harvesting, etc.) the 0 level characters get to roll an extra 1d6 for the stat of their choice. Once each stat gets up to 3d6 you become Level 1.

A lot happened in the session. After the Hazu harvest we opted to go fishing, at which time we encountered a Vacucmber right out of Booty and the Beasts! We also interacted with some of the elders of Island Town, had a mysterious nighttime encounter with a Rubber Face - one of the original island inhabitants, and went on a quest for sea shells in the worm infested caverns beneath the island. This was one of the most creative roleplaying sessions I've ever played in.

Erol, being the super cool guy he is, handed out drafts of the Island Town module to each of the players after the game. He is planning on making a formal release of the module at NTRPGN Con in 2012. Be sure to get a copy when it's released! Here are a few teaser snapshots of my playtest copy: 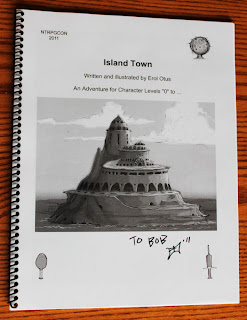 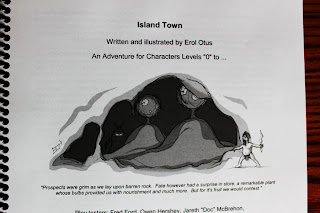 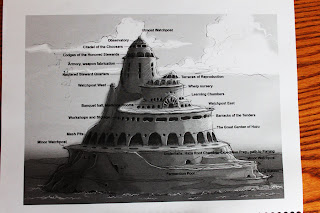 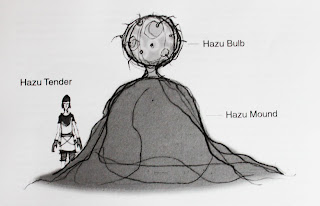 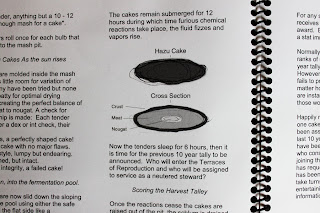 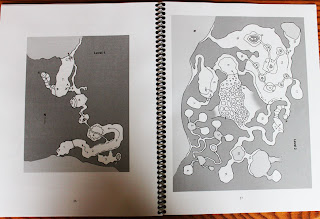 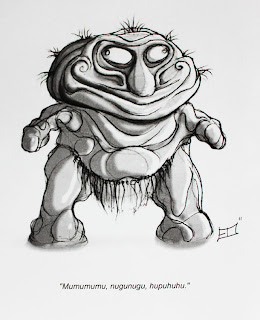