The Fungus Caverns of Etidorhpa (Lloyd 1895)

It's probably safe to say that we all love the idea of subterranean caverns filled with strange oversized fungi. I certainly do. Because fungi survive by decomposing decaying organic matter, however, it actually makes very little biological sense for a deep cavern system to support forests of gigantic mushrooms, unless, of course, some ultramundane forces are at play. For me, this hint of magic actually makes the vision all the more appealing. Eventually, I hope to compose several substantial posts on the supernatural history of fungus caverns. For now though, I would like to point out an early and lesser known bit of fantastic fiction describing a fungus forest: Etidorhpa by John Uri Lloyd, published in 1895.

Lloyd was a pharmaceutical chemist who had never published fiction before the release of Etidorhpa (which is Aphrodite spelled backwards, by the way). This book is a weirdly charming yarn and an early landmark in the hollow earth genre. Lloyd was heavily involved in freemasonary, which is a prominent theme in the book. Etidorhpa has excited the sensibilities of some folks in much the same way that the Amazing Stories Shaver Mystery did 50 years later - both having lead especially sensitive readers to believe that some elements of mystical truth might underlie the fiction.

From a mycological perspective, the more entertaining parts of Etidorhpa are this illustration and text describing a great fungus cavern (yes, that is a nude hairless humanoid with no eyes): 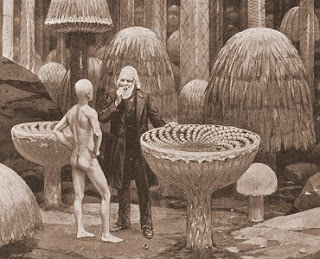 "Along the chamber through which we now passed I saw by the mellow light great pillars, capped with umbrella-like covers, some of them reminding me of the common toadstool of upper Earth, on a magnificent scale. Instead, however, of the grey and somber shades to which I had been accustomed, these objects were of various hues and combined the brilliancy of the primary prismatic colors, with the purity of clean snow. Now they would stand solitary, like sentinels; again they would be arranged in rows, the alignment as true as if established by the hair of a transit, forming columnar avenues, and in other situations they were wedged together so as to produce masses, acres in extent, in which the stems became hexagonal by compression. The columnar stems, larger than my body, were often spiral; again they were marked by diamond-shaped figures, or other geometrical forms in relief, beautifully exact, drawn as by a master’s hand in rich and delicately blended colors, on pillars of pure alabaster. Not a few of the stems showed deep crimson, blue or green, together with other rich colors combined; over which, as delicate as the rarest of lace, would be thrown, in white, an enamel-like intricate tracery, far surpassing in beauty of execution the most exquisite needle-work I had ever seen. There could be no doubt I was in a forest of collossal fungi, the species of which are more numerous than those of upper earth, cryptomatic vegetation."

In the book it turns out that these titanic mushroom forests are a perfect food source for the humans who eventually forsake the surface of the earth to exult in a new immaculate existence in the inner sphere. If so inclined, you may read the full text of Etidorhpa here. Enjoy. 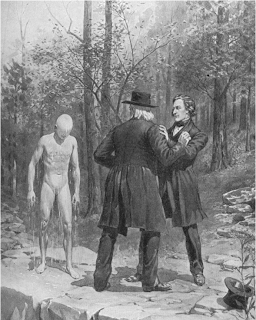