Here is a match made in cyclopeatronic heaven: Paul Lehr doing cover art for Jack Vance. In this case we have Lehr gracing the first print covers of the all three books of Vance's Durdane trilogy. The first book, The Anome, first saw the light of day as the very Dell paperback edition shown below. The next two books, The Brave Free Men (originally entitled The Roguskhoi) and The Asutra, were initially published as serials in The Magazine of Fantasy and Science Fiction, but were quickly reprinted as the Dell paperbacks pictured.

In my highly biased opinion these books are a great read. The setting is classic Vancian "medieval sci-fi": a planet that has been inhabited by humans for thousands of years, but where the cultures have largely forgotten their earthly origins and have lost much of their capacity for technology. In the case of Durdane, there is a severe limitation on technology due to a lack of metal ore on the planet.

This series particularly appeals to me because there is a strong musical theme running throughout. The main protagonist is a stringed instrument player who enjoys a weird style of complex improvisational music that draws much of its aesthetic from early jazz and old-time string band music. Even the names of the wandering minstrel troupes of Durdane sound a lot like what you might find on 78rpm jug band records, but flavoured with the chromatic psychedelia of Vancian sci-fi. I collect and play 1920s string band music myself (here's a shameless plug for my band: Sausage Grinder), and, as I wrote about previously, Jack Vance is a fellow enthusiast of this now obscure music. 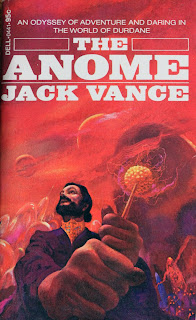 THE ANOME (1971) - First book edition: Dell 1973. The best book of the bunch, in my opinion. Amazing fiction! Look at the gorgeous cover art. That thing around the man's neck is a "torc". Upon reaching a certain age, everyone living on the continent of Shant receives one of these devices. If that person breaks any of the laws of their canton - POP - their head explodes. Who enforces this? THE FACELESS MAN of course. In this book we follow the exploits of a boy who runs away from home to join a string band, travels across Shant, and eventually seeks out The Faceless Man himself. Check out the nice glass city on the cover of the book - you can visit there yourself by reading The Anome. 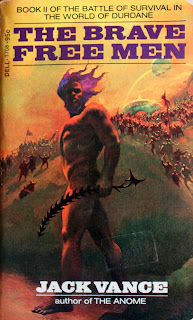 THE BRAVE FREE MEN (1972) - First book edition: Dell 1973. Originally called The Roguskhoi and published in The Magazine of Fantasy and Science Fiction. The paperback has a classic Paul Lehr cover: saturated colors, rushing crowds of faceless people, and that Meltzoff-inspired spaceship just to the right of the roghuskoi's shoulder. This book is about the struggle against the roguskhoi - a mysterious race of naked male barbarian clones who enslave and impregnate the innocent women of Shant. Once impregnated by a roguskhoi, a women will give birth to more roguskhoi clones. A dangerous situation, yes. 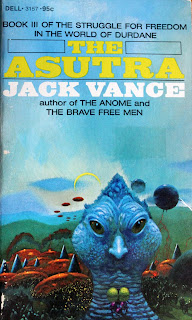 THE ASUTRA (1973) - First book edition: Dell 1974. The weirdest book of the three. The protagonists explore distant and wild shores of Durdane and we also get a glimpse of another planet and learn about the bizarre parasitic aliens known as The Asutra... all awesome stuff that makes me drool. This book has amazingly great cover art of a strange landscape with star ships and a serious looking alien head. I could never imagine a book looking like this being published today.