A few days ago Mike Mearls made a fairly exciting post on the D&D Next website. In it he expands on some earlier discussions outlining plans to craft a two-tier system for D&D Next, where there would be a completely stand-alone basic core set that could then be expanded to make a crunchier 3.5/Pathfinder like game if players so desired.

Mearls description of the core set makes it sound like it would be squarely aimed at OSR-types, new gamers, and returning gamers. His vision essentially describes as a virtual re-release of the 1981 Basic/Expert set combo. I am stoked! This model would be something that would differentiate 5e from Pathfinder while also leveraging D&D's pop cultural visibility to attract new players into roleplaying. I like it and I hope it happens.

Mearls' post is also kind of amazing because it reads like he is making a point-by-point response to my previous musings on the last D&D Next playtest packet, right down to paring down combat options and citing Settlers of Catan as a model for maximum rules complexity. Hmmm....

I just want to express how excited I am by what is being expressed. I am hoping to see a playtest packet of the new Basic Set soon!

Draft of my Appendix N, With Notes

Every game blogger has to give up their own Appendix N. Right. Here's a first stab at my N. This is a short shortlist of the books that have most directly influenced my referee style. It's all stuff worth multiple readings to me. For each entry I also provide a brief description of its import and/or influence. You can probably tell that I value style and atmosphere more than world building or narrative arc. Much of this list probably isn't very surprising, but perhaps my notes will add some interest to this exercise.

David Lindsay - Voyage to Arcturus (1920)
Deliciously weird atmosphere. Episodic format. Radical plasticity of character. Characters emerge from the environment and merge into each other. Imaginative.

Italo Calvino - Invisible Cities (1972)
Relentless imagination. Language and visual aesthetics. A model for the intersection of weirdness and meaning. Institutions and materials emerge from the dreams and psychoses of groups.

William Hope Hodgson - The Night Land (1912)
Style can be substance. How far can you push the limits of weird? Every world must have at least some pocket like the Night Land, and inscrutably old threat with boundaries beyond observation. Someone has a better imagination than you - you need to work harder. Among the best atmospheres.

Clark Ashton Smith - Zothique, Hyperborea, and planetary stories. (1926-1935)
Firehose of imagination. Style, space wizards, novelty, quality. One of the best prototypes of what 20th century fantasy could have been like. There's a lot to say about C.A. Smith - you probably already know the appeal.

Stanislew Lem - Solaris (1961)
A finest vintage for connoisseurs of weird planets and alien interactions. Sinking feeling of lovely horror. Look here for the limits of your species, human.


H.P. Lovecraft - all weird fiction (1919-1937)
At his best, a model for peeking at the elephant of otherworld threat. Wilbur Whateley, the hillbilly wizard in Dunwich Horror, is a fabulous example of how we have yet to exhaust the magician concept. Placing the cosmic in a familiar setting.

M. John Harrison - The Pastel City, A Storm of Wings (1971, 1980)
Maybe not an outstanding literary achievement, but overall this is a great model of how a successful Vance-inspired gaming campaign would look. An ideal blend of imagination, pacing, characters, accessibility, and mode of adventure. Digging through the scraps of mankind's spectacular failures. Fast, fun reading.

Jack Vance - Durdane, Dying Earth, Demon Princes, Tschai, Dragonmasters (1950-1984)
Where to start? Perfect characters. Style. Language. Imagination. The Dying Earth series provides one of the first and best templates for an old planet, and it is one of my favorite models for the culture of magicians. Durdane and Tschai are just incredible settings. The alien colonization and evolutionary themes in Tschai and Dragonmasters in particular have been very inspirational to me. The Demon Princes series is the greatest guide for the construction of villainy.


George Macdonald - The Princess and the Goblin (1872)
I love goblins, and they are at their best here. Goblins are all over my games so I have to credit this source. This book also has a nice early imagining of a dungeon adventure. Tasty, dreamy quality.

Style and language. Where fairy tales and dreams intersect. I want stars, moss, and woodsmoke at my table. Dunsany is peerless when it comes to fantasy imagery.

A.E. van Vogt - World of Null-A (1948)
Nice, compact model for weird psychological interplanetary intrigue. The best elements of P.K. Dick long before P.K. Dick. I like the mix of ingredients in this weird, fast-moving bit of sci-fi.

Does anyone know what's happening with Ramsey Dow (a.k.a. Yesmar of the excellent, but now-on-hiatus Sickly Purple Death Ray blog) and his Calific company?

They've promised some wonderful-sounding Swords & Wizardry supplements, the Calific website is full of awesome full-color Russ Nicholson art and exciting promises. It's been a few years since the endeavor was announced, however... I'm just curious to know if something is still happening... Anyone know?

Verner Panton was an Danish interior designer who did absolutely incredible work in the late 60s and early 70s. Take a look: 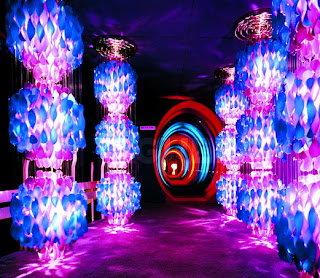 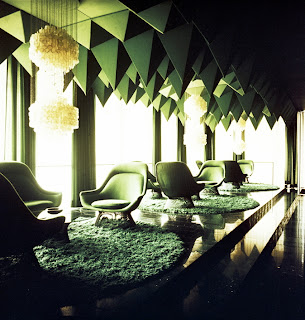 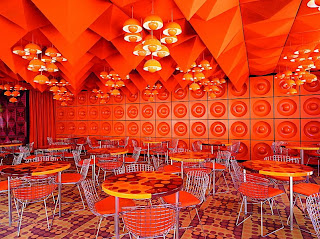 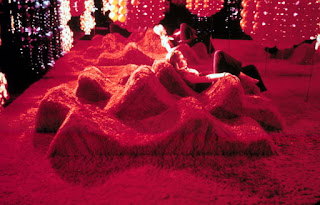 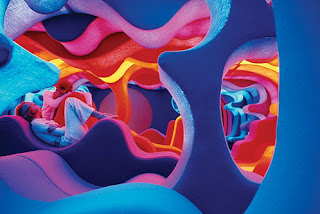 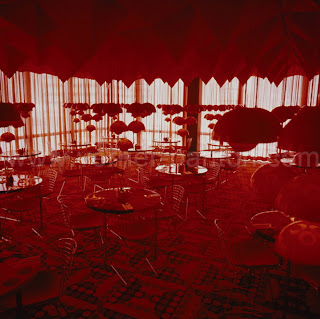 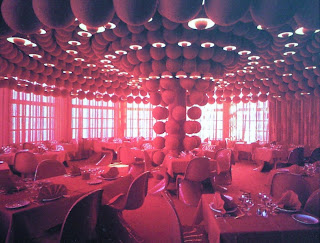 D&D Next and the Ultimate Criterion of a Good Game

For me to adopt a roleplaying ruleset it must meet my ultimate criterion: non-gamers can jump into a game quickly and not have to spend time between games reading rulebooks.

Why? Practical experience. Many of the most enjoyable, creative, and engaging players I've had in sessions are not gamers per se. They are people who would likely never think of buying or reading a roleplaying rulebook, even in the depths of a regular campaign. I've found that a player's previous experience playing RPGs is a fairly weak predictor of how fun he or she will be at the table. Behaviors that are much better predictors of player quality might better include... say... daydreaming, frequent laughing, weeping in the cinema, doodling in margins, appreciation of telescopes, the ability to identify mushroom genera, playing fiddle, or staring at clouds.

I'm a gamer and I have no problem with rules. In fact I pride myself for my ability to absorb and teach rulesy boardgames very quickly. But take my friend the biogeochemist, take my friend the puppet maker, take my friend the insect taxonomist, or take my friend the thirty-something lapsed gamer. There's no way these people are going to sit down with me to play the current flavor of Dungeons and Dragons, even though it's an amazingly cool game for what it is. But, hell, I want them to come over to my place, enjoy a stout, and pretend to be elves.

One of the wonderful things about the original D&D boxed sets and their retroclones is that they meet my ultimate criterion perfectly. In 15 minutes I can have a non-gamer cheering, talking in a funny voice, or trying to communicate with a goblin in sign language. This is remarkable if you think about it.

After the original announcement my hope was that D&D Next would fit my criterion. It would be a simple, intuitive set of core rules with the complexity level of Monopoly or Settlers of Catan, yet, because it's called "Dungeons & Dragons", it would still sport name recognition and commercial reach such that there would be significant interest in mainstream gaming circles and no dearth of would-be adopters.

My reading of the first D&D Next playtest packet made it seem like this could quite possibly happen. With sadness, however, I just browsed the newest playtest packet released Dec. 17. It's now crystal clear this isn't going to happen.

D&D Next is becoming too too too complex. Like the edition(s) before it, it's a game targeted at gamers. There are too many pages presenting lists of formalized special powers with capitalized names. There are too many categories of these abilities, specializations, and so on. There are too many formal actions a character is permitted to make in combat. Simply, if a session were to go smoothly a player would have to know a lot of rules before coming to the table. Players couldn't simply describe in plain English what they would want to do - they would have to present a list of capitalized code words that would permit reference to highly specific formulas in the text. There is just no way I could have a quick session of this game with my non-hardcore gamer friends or family. For a session to work, all players would have to have read the rules in some detail beforehand and would constantly be consulting books during play. This is antithetical to the fast-moving, intuitive style of roleplaying I prefer.

Having just moved to a new town I was toying with the idea that eventually I could get a group together where we could start by playtesting D&D Next, then ease into the final published version. Not now. Too bad, really.

Okey-dokey. I am in Ithaca now. I have a very satisfying new job here, I enjoy this fair town, and my second son was born just about a month ago. I am still swimming in chaos and care, and I don't expect to do much gaming or blogging in the near future, but nonetheless I have started google snooping about for others in the region with similar gaming and reading habits. I've been in touch with a few, but not with all. Here's a working list of local personalities with web presences, including link to blogs and websites. Because these folks have public websites and blogs I am assuming there's nothing creepy about my web surfing. If any of you don't like being on this list let me know and I'll take you off.

Of course I'd appreciate any more leads!