The main reason I went to SoCal Smackdown last weekend was to play in Brunomac's OD&D Dungeon Crawl on Saturday afternoon. This was a continuation of a game he started at the SoCal Mini-Con III, but that I wasn't able to participate in at the time. It sounded like too much fun, so I didn't want to miss out this time around.

Besides being a fun fast-moving low-level dungeon stomp, it was also kind of a remarkable game because most of the players at the table, 4 or 5 of them, were first-generation D&D players who started with the little brown books back in the 1970s. It struck me that I've never really been at the table with a whole group of grognard players like this before. Before we started the game, it was interesting hearing them chatting about the big Orange County D&D group that used to meet at Cal State Fullerton back in the late 70s. It also turns out that a couple of these guys started the first O.C. gaming convention back in the day (OrcCon - which was bought out by Strategicon and moved to L.A. - long story, yawn). 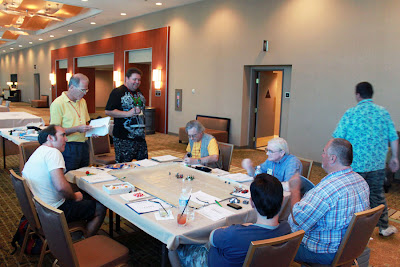 So I pulled out my little Collector's Edition whitebox thinking I was all cool and maybe could hang, and one of the guys jokingly says "I don't know what this whitebox stuff is all about, I always played this..." and he pulls out his original battered woodgrain OD&D set. He also had a clipboard with notes and tables he used at the original Dundracon 35 years ago. Awesome... 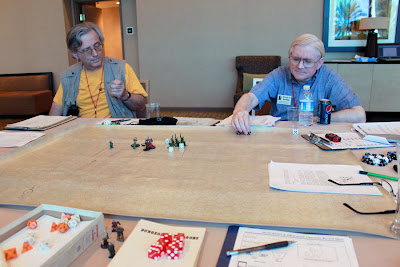 Anyway, it was a raucous and jolly game led by Brunomac, a hilarious loudmouthed DM. We were boozing it up while our characters were massacring kobolds, slipping in goblin poop, and hacking at gelatinous cubes. Beautiful afternoon!