A first printing of the original Dungeons & Dragons boxed set just sold on eBay for $5,600: 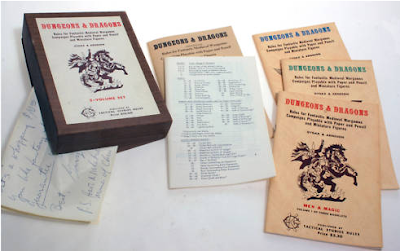 This game is from the first print run of 1,000 copies that Gary Gygax himself hand-assembled. This particular set is remarkable for its near mint condition - most known copies have been used to some degree, many quite heavily. Also notable is this set's provenance, as it comes with a letter hand-written and signed by Gygax:

Thanks for your interest in D & D! The enclosed flyer should solve your old problems re the loca-tion of TSR… Note the set costs a whopping $10.00, but if you like fantasy I’ll personally guarantee your satisfaction.

P. S. Have a relative in Chicago by the name of (same as yours)?

The lucky high bidder also received “the first Supplement I (did not come with cover---24 pages) and second Supplement II (60 pages)” and “the original sales flyer missing the cut-out coupon that was used to order the set”. A rare and spectacular collectible, indeed! Prior to this sale, the highest price paid for a first printing of D&D was $5,100 in 2006, according to The Acaeum.

The seller also sold this first printing of Chainmail for $1,236 in a separate auction: 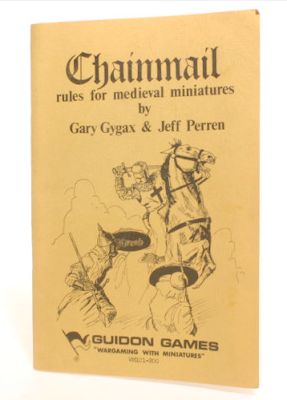