This last weekend was Gamex 2010, one of the three big gaming conventions in the Los Angeles area. Guessing from the nametag numbers, attendance was probably somewhere near 1000. It was a nice sized event with tons of board games, RPGs, and beautiful epic miniature battles. The con was 4 days, but I could only attend Sunday because of other obligations. I took full advantage of my day at the con and ended up roleplaying for about 20 hours straight, with breaks for lunch and dinner. Starting at 9am I played in a Traveller session, I refereed an afternoon session of first edition Gamma World, and I played in an 8pm-3:30am session of old school Tunnels & Trolls. Yes, a great Sunday!

This year the selection of RPG sessions was quite good, meaning that for many time slots there were multiple games I would have been keen to play in. However, seats for some of the really interesting games filled up quickly. I was even surprised and flattered to see that my afternoon Gamma World session was overbooked when I arrived Sunday morning - I had 9 players sign up for 6 slots. I was prepared for 8 players, so I was able to take the first two alternates. I lucked out and had an awesome and animated group, including some classic Gamma World fans I’d never met before – one guy even came prepared with cool minis and set-pieces! I’ll make a more detailed post on the Gamma World game shortly. (UPDATE: Read about it here!) 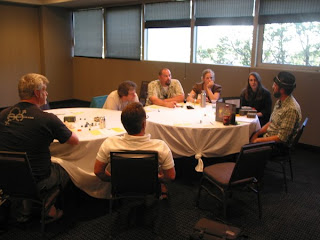 Old school RPGs were pretty well represented at Gamex this year. There was a lot of Call of Cthulhu action and Robert Lionheart ran a bunch of sessions of Classic Traveller and Tunnels & Trolls. There was also off-program Gamma World action going on Saturday and Sunday nights.

My biggest regret of the con was not getting in on any of the Dead Gamers Society sessions. There are a lot of fun and creative gamers in this group that are a blast to hang out with. Luckily they're going to schedule a game day this summer to rerun a bunch of their Gamex sessions for those that missed out this weekend.

Lionheart’s Tunnels & Trolls game was definitely one of the high points of the convention for me. Lionheart, known as spinachcat online, is quite a talent. In the T&T game he was able to relay a very deep and convincing high fantasy background, and get the players in on some exceptionally satisfying epic-level action very quickly. Lionheart’s narrative, roleplaying, and refereeing skills are all excellent. This was my first experience playing T&T, and it was really great. We played using somewhat homebrewed 4th/5th edition rules.

Yes, a great Sunday! I can’t wait for the next convention! 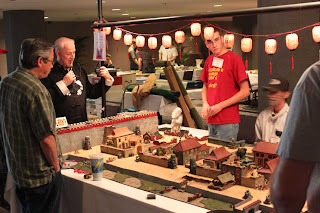 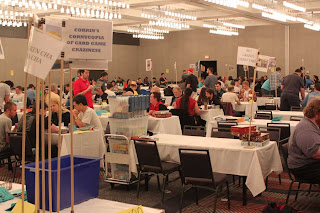 One Corner of the Boardgame Hall