WyrdCon: I Was LARPing With Larry Niven. What Did YOU Do Last Weekend?

Last weekend was the first ever WyrdCon, which was totally devoted to LARPing. Until last weekend I was almost completely ignorant of the LARP scene – I had never LARPed before, and, while I’ve been curious to try, it has never really been high on my list of priorities. When I learned that WyrdCon was going to be literally a few blocks from my house I decided it would be a perfect opportunity to give it a shot. I participated to some degree in four LARP games. The games I was involved with represented a pretty wide spectrum of LARP styles and I think offered a good glimpse into the genre. Here’s a rundown of the different sessions I participated in, and how I would personally categorize them :


Starship Valkyrie – AWESOME STYLE: This was one of the most amazing gaming experiences I’ve had in a long time! Starship Valkyrie was a highly intense simulation of being a crewmember of a starship. I really felt like I was part of the bridge crew on an episode of Star Trek or BSG!
Picture a large open penthouse suite in the Hilton transformed into the interior of a starship. There was a bridge area with a huge plexiglass hexmap/star chart and console stations for navigation, ship weapons, scanners, and communications. For communications there was a large flat-screen TV with a Skype connection to another hotel room where some players were on another disabled starship. In other parts of the main suite were consoles for things like sick-bay, engineering, science labs, etc. There was also a table set up in one corner to handle off-ship starfighter battles using a referee-run card-game mechanic designed by the GM. The GM had obviously put a ton of time into designing this game and hand-building the console stations, most of which had electronic timers and card-slots with damage and repair information, etc. Each player received a tiny booklet with a description of their character, including what they were skilled in and what consoles they were able to operate. I counted around 25 players, 3 NPCs, 2 assistant GMs, and 1 main GM.

The game mechanics were brilliant. At its core it played a lot like a cooperative boardgame (eg. Pandemic, Space Alert, or Shadows Over Camelot). Different players and/or teams had different assigned duties, and were forced to self-assemble into functional crews based on their expertise. The game was very intense as we were trying to deal with emergencies as the captain, a player, was trying to collect information and decide what commands to give in light of time and resource limitations. At one point we sent an away team to another disabled starship in another hotel room, and stayed in contact using the Skype connection. One of the best parts about the game is that it didn't REQUIRE people to take on goofy characters or accents - you could pretty much just be yourself and get into the game as a simulation.

It was beautiful! I'm dying to play again! I'm kicking myself because I didn't bring my camera to the session - I had no idea it was going to be as cool as it was! The GM / designer was a fellow called  Christian Brown who is associated with Enigma Live Game Lab, which sprung out of the UCLA sci-fi society. After the game I contacted Christian to see if he'd want to run a game for some of us later this summer. He said YES! Awesome! We're tentatively aiming for an August game here in Orange County - any of you blog readers who might be interested in joining in let me know!
Vampire: The Masquerade – RPG Style: I’m embarrassed to admit I’d never played Vampire before, despite it being one of the most popular and influential RPGs of the last 20 years. Although I’m personally not into the gothic vampire aesthetic too much, I really wanted to try this game. What better chance than to play in a session refereed by the original designer himself – Mark Rein-Hagen? Joining a nighttime game run by the designer was both awesome and horrible. It was awesome because he spent forever talking about the complex background of the game and helping us design characters. It was horrible because he spent forever talking about the complex background of the game and helping us design characters. I was really surprised he didn’t come prepared with pregens, a level-one no-no for con game referees. It was almost two hours before we actually got to start playing the game. After about 30 minutes of actual playing my companions were totally overwhelmed and burned out, so we skipped out of the game early.
I would like to say that I thought it was a great experience, however. Rein-Hagen was an excellent storyteller and narrator, and the players were very intensely into the game. If my companions had not wanted to leave, I would have stayed all night to play. The game system was definitely more like a traditional RPG, where everyone had a character sheet with different ability scores and specializations. Conflicts were resolved with a combination of ability point comparisons and spending, and paper/rock/scissors.
Another cool note about this session was that Larry Niven sat in on the first part of the game! Since I was a kid he’s been one of my favorite sci-fi authors. He was basically silent the whole time – he seems like a pretty quiet guy – but it was awesome to meet the man. I couldn’t resist weakening into a compliment-slathering fanboy and getting a picture with him… 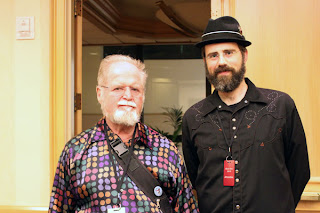 Pieces of Hate – Combat LARP: This was basically a bunch of people in costumes hitting each other with foam swords. It was good goofy fun, even if the roleplaying and story elements of the game were paper thin. We started in a dark room that was set up like the deck of a sailing ship. NPCs portraying water and wind elementals were running around the outside of the deck trying to hit us with foam weapons and bags of rice (spells), and all of us PCs were trying to reach over the side walls of the ship to do the same to them. Eventually the ship “landed” and we transferred to another room with a cavern set up where our party battled a bunch of kobolds, and after that, with scary magical demons pouring out of a magical strobe-light portal. This last battle took place in a pretty big ballroom, and it was fun organizing team combat maneuvers. There was a really simple rule system (NERO) covering how to score hits and keep track of hit points. It was definitely a lot of fun and a pretty good physical workout as well. I’d surely do it again, but I wouldn’t go out of my way to get into combat LARPing as a hobby or use up future convention time I could otherwise spend playing real RPGs.

Messina - Cosplay Style: I think this pretty well represented the stereotype of LARPing I've always had in my mind. It was basically a bunch of people in random costumes, including elves, steampunks, goth vampires, etc. running around, hamming it up with goofy fake accents, playing jenga, and basically having a no-holds-barred geekout party. I definitely respect this and think it’s cool and fun, but my companions and I had a hard time getting into the spirit, so we left pretty quickly. 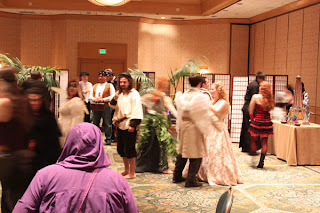