After playing Tunnels & Trolls a few weeks ago I was inspired to draw up a simple spell point system for spell-casting in D&D. In T&T spell casters spend and slowly regain spell-casting points as the game progresses.


First of all I want to say that I love the Vancian Magic paradigm of classic D&D, and I have no desire to alter the original system. Therefore, I present this homebrew spell point system as a new magic user character class - The Oranjian Wizard - which can be played alongside by-the-book Vancian magic users: 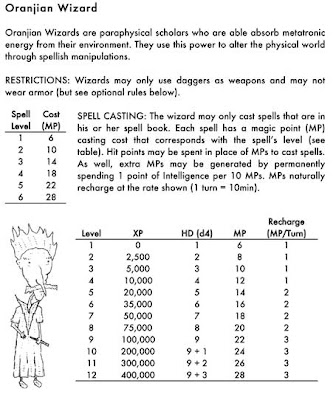 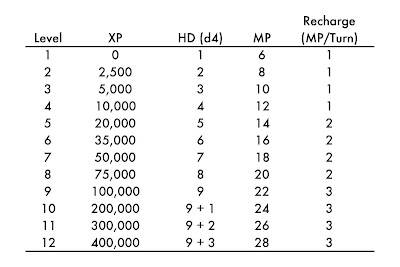 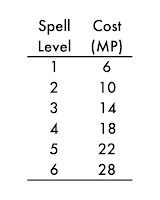 So, consider... Given that a first-level spell costs 6 MPs, after an hour of in-game time (i.e. six 10-minute turns),  the MPs will be recharged enough to cast another first-level spell. Obviously, it takes longer to recharge for high-level spells. Hit points may be spent in place of MPs to cast spells. As well, extra MPs may be generated by permanently spending 1 point of Intelligence for 10 MPs.

Also, the normal rule applies that any spells cast MUST be in the wizard's spellbook.

•    MPs may be used for other non-spell casting purposes like ability checks and/or saves or operating certain magical devices.

•    The DM may define unique casting costs for specific spells. There may even be versions of spells that have identical effects, but different casting costs. For example, a version of Sleep that costs 4 instead of 6 would be highly sought after.

•    Some spell effects may be scaled up when more magic points are spent.

•    Additional armor types may be allowed, resulting in a penalty in maximum MPs or MP recharge rate.

•    The MP recharge rate may be increased while the wizard sleeps.

•    Some environments may block, retard, or enhance MP recharging.

•    MP recharge rate does not increase in wizards of advanced level. This would significantly decrease the power of high-level wizards.