A little over a week ago I ran my Gamma World one-shot “Floating Castle of the Wasp Women” at Gamex 2010. It was cool - I had eight players sprawled over two tables, and they were a funny and animated bunch. Most of them had played Gamma World before, so running the game was a snap. 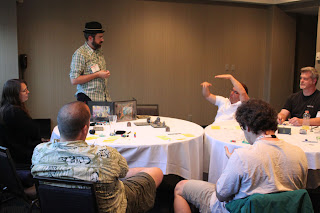 I saw my main challenge in planning the game as preserving the random weirdness that comes out of the unexpected mutation combos while keeping the game fast and easy for potential newbies. I resolved to make pregens, but deal out mutations and equipment from decks of cards.


Mutation Decks
I made two mutation decks. A green one for physical mutations and a yellow one for mental mutations. I used text recognition software to read the text directly out the first edition Gamma World rulebook, and Illustrator to lay out the cards, removing a few mutations that had really long or confusing descriptions. I put two of each of mutation in the respective decks. After each player picked out a pregen I had them roll 2 d4s, the first d4 being the number of mental mutations to draw, the second d4 being the number of physical mutations to draw. Email me if you want to make your own mutation cards - I'll send you the files. 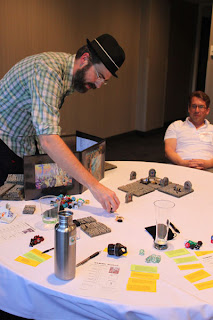 Mutation Cards in Action
The Party
After everyone picked pregens from the pile and drew their mutation cards, we went around the table and everyone briefly described their character’s mutations while I mentioned any (very) minimal background story any character may have had. The party ended up being:

Musculus McGee – Four-armed mouse man with a bitchin anti-grav Datsun 280ZX. The envy of the skies! 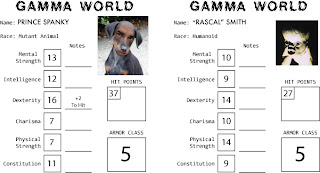 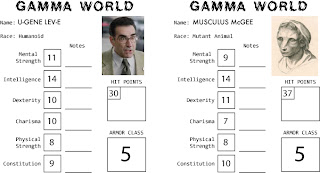 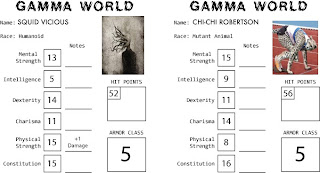 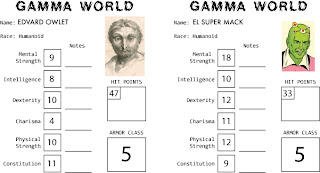 The Adventure
(SPOILER ALERT: Read no further if you might want to play this scenario.)
The game began at dawn with screaming and fire on the PC’s floating Sky Island village. The green antigravity-generating head - “Bill” the Gravitron - had been stolen away during a raid by humanoid wasp women! The players had exactly 3 hours to return the head to the island before the village crashed into the radiated wastes of earth below! The players jumped into the anti-grav 280ZX and zipped into the sky in pursuit of the wasps!

They found the wasps living in a flying medieval castle with a huge two-story wasp nest protruding from its side. Near the drawbridge of the castle, on an outcrop of rock, was a semi-truck trailer and a few tents inhabited by human servants of the wasps. The party learned that these men were psychic slaves of the Wasp Queen, and they worked to maintain and run the castle whose computer system only responds to human commands. The party found one human named Bumpy Bo Bappy who had slipped out of the wasps’ mind control and wanted desperately to leave the castle. He was willing to help the party infiltrate the castle and let the party into the castle through a service entrance on the roof (after a brief fight with some wasp soldiers). 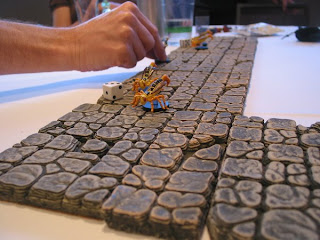 Wasps Swarm the Castle Battlements!
To make a long story short, the castle was a flying theme hotel from pre-apocalypse Las Vegas. In one of the guest rooms the party found an imprisoned worker-caste wasp woman named Prixie who wanted to rebel against the Queen and liberate the wasp hive from its tyrannical eusociality-imposed sterility (wasp nests are almost all non-reproductive females working for the Queen). Prixie was able to produce a small amount of pheromone to turn some of her sisters against the Queen – and together with the adventure party they started an insurrection in the wasp hive! Equality for all diploids!

To complicate matters even further, a week before the adventure took place the diminutive King Helix had effected a coup, imprisoned the Queen, and was using her pheromone to control the hive. The last 1/3 of the session was a race around the hive and the castle, in the middle of an escalating wasp civil war, trying to find King Helix and the Gravitron. The party rocked it, with a totally rad invisible-quarterback Gravitron toss / teleport maneuver at the end of the game that returned Gravitron Bill to the Sky Island despite U-Gene Lev-E’s constant seizures. The party took out King Helix with a grenade, and managed to take control of the flying castle by capturing the small human boy who piloted the castle. The party had only one casualty near the end of the game. A romance blossomed between Prixie and Prince Spanky, suggesting a common future for the Sky Island and the Liberated Wasp People. 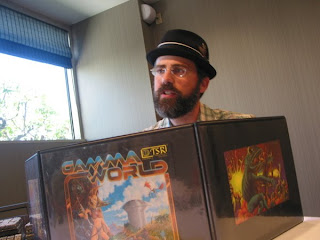