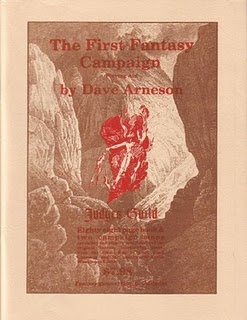 At the last St. Crispin's Irregulars' Monday Hobby Night (every week in Anaheim) I ran an OD&D pick-up game using Dave Arneson's Blackmoor Dungeons straight out of the old Judge's Guild First Fantasy Campaign book. For those of you who haven't seen FFC, it's a remarkable document describing Arneson's Blackmoor campaign from the early 1970s. One of the many highlights of FFC is a set of keyed maps for the first ten levels of Blackmoor Dungeons circa 1970-71. This scenario represents the first megdungeon, and, more importantly, the first homebrew campaign that spawned D&D itself.

Browsing the maps and keys of of Blackmoor Dungeons can be somewhat disorienting to modern gamers, and I've always wondered how in the world this dungeon could be much fun to play. First of all, the place is a gigantic, horribly complex maze full of dead ends, empty rooms, and angled passages. I'd always imagined that running a session in Blackmoor would be an exercise in mapping tedium. Second, the keys have virtually no information beyond what treasure and/or monsters might be in a given room. Third, almost all of the monster encounters on the first level are insanely difficult for a first-level party - assuming, that is, that the party simply chooses to stand-and-fight (which most modern players are inclined to do in my experience).

Sooo... I wanted to see what was really like to play Blackmoor. I was especially encouraged by Tavis Allison's positive play reports and suggestions. To get around the mapping problem I carefully drew out the dungeon on a dry-erase battlemat grid as the players progressed. Luckily, one of the players was keen to draw a map as the party progressed. This aspect of things seemed to go fine. In terms of the sparse room keys, beforehand I looked for patterns in how the various groups of monsters were placed relative to each other in order to think about what might be going in the dungeon. For example, in one small area of the dungeon there was a nest of giant spiders located extremely close to a high-density goblin dwelling, so I assumed a special relationship between the goblin clan and spiders. In this respect I found the sparse key to be extremely conducive to my extemporaneous DMing style and very easy and fun to work with.

The game moved quickly and was great fun. The turnstiles and elves with the holy water fire hoses guarding the entrance to the dungeon set the tone for the game - especially when the bored elf lord patrolling the door required all dungeon entrants to down a shot glasses of holy water to test for vampirism. The PCs and their hirelings (hired at the elf fair in the middle of the old Blackmoor Castle grounds) were doing quite well for most of the adventure - they methodically mapped the grand entrance hall in the darkness, explored some empty areas, found the Orcian Way (but decided not to take it), and firebombed a bunch of giant spiders into oblivion (thereby picking up a huge bag of gold from the corpse of an unlucky previous adventurer).

The group was deciding whether they should take the money and run (only 2 casualties at that point) or explore a bit more. As they went back to mapping the perimeter of the main hall on their way to the exit they ran into a group of wandering goblins and were slaughtered - partially due to some dramatically unlucky rolls and a fizzled sleep spell. They ALMOST made it! Yep, a TPK - but there were a lot of laughs, shouts, and groans and it was cool fun. Everyone wants to give it another try, so I guess that's a good sign!

Some interesting observations on 1st level play in Blackmoor:

2. None of the encounters are routine. It's either glory or death. Almost every encounter consists of extreme danger and/or extreme riches. There's little in between.

3. Combat is almost never the best option. There's no way a party of 1st level characters is going to successfully fight through most of the keyed monster encounters, even with a big gaggle of hirelings. They have to think up a clever solution pretty much every time. Or run like hell.

4. Grinding for XP and gold is not an option. It's feast or famine. If you can use your wits and survive long enough you will eventually find a big stash of treasure, level up, and be able to get better hirelings. Grinding through easy little monsters and picking up little bits of treasure isn't an option in the Blackmoor Dungeons.

Blackmoor: We'll be back! I'll try to run the next session at a public venue (I'll post details for anyone who wants to join in). Thanks again to all the great players that showed up last Monday!