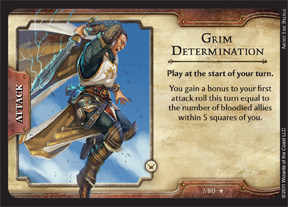 Hasbro has announced the Feb 8 release of their new D&D Fortune Card booster packs. For pictures and details CLICK HERE. It seems that players will soon be able to bring to the table their own self-constructed card decks that they may draw from during encounters. As with Magic: The Gathering and other CCGs you buy random booster packs containing certain numbers of common, uncommon, and rare cards.

"For some Wizards Play Network programs aimed at experienced players, Fortune Card purchase will be a requirement to participate,"

Luckily, however, it also says:

"Some players may show up to a game without any Fortune Cards, and that’s OK – they can still play D&D alongside those players that have them in action."

I can't imagine any player not investing in a deck, however. Could you picture yourself playing in a game, sitting next to other players who keep drawing awesome powerful rare fortune cards, while you don't even have your own deck?

As others have pointed out in this thread at RPGnet this means that you can now make your D&D characters more powerful simply by spending US $.

It's very interesting to watch "Dungeons & Dragons" rapidly morphing into... something... else...?