Travel Through a Human Door

Our last D&D whitebox session took place on a lovely Sunday morning at a friend's house on Mt. Washington. From the hillside we had a great view of the Los Angeles basin while sitting at the playing table. Coffee and mimosas circulated for the ~4 hour session. In the old ramshackle house next door was an acid damaged squatter who was playing weird and quiet improvisations on his Casio keyboard all day. It was actually kind of a nice atmospheric backdrop for the game. After D&D some of us went on a walk through the hills, grilled up dinner, and played some Dominion. 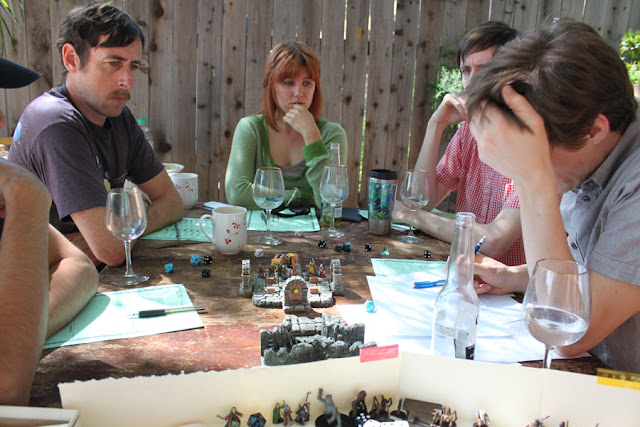 About halfway through the D&D game the party found themselves in a wooden room. They broke through a wall and found the room was surrounded by a large dark space in every direction. The only feature they could detect in the darkness was a pillar a stone's throw away with a 7' tall, thin, and mustachioed man sitting on a chair. The man said his name was "I Am The Door".

It turns out that he was a rare and ancient Human Door. The characters learned that they could merge into the man's torso and be transported through space to different locations. They also learned that, upon invitation, I Am The Door could merge into himself to travel along with the party. Sadly he had been little used for so long - centuries in fact - that he could only remember two locations: (1) a  wizard's chamber isolated deep inside the planet and (2) the way to a place called Wiggin's Drop City. I Am The Door said he could easily learn new locations when provided with appropriate Door Scrolls containing coordinates, however no one in the group had ever seen such a scroll.

And so, after traversing a rope to the pillar in the darkness, the party merged with I Am The Door...