Gamma World’s reputation as a totally zany game comes partly from its rampant anthropomorphism – namely, animals walking on two feet and speaking English. The official storyline given in the early editions of Gamma World – nuclear holocaust – doesn’t do a great job of explaining how radioactive fallout can result in badgers becoming bipedal, donning medieval armor, and acting like gnolls. While leaving the causation a mystery is fine, it’s certainly fun to think more deeply about specific scientifiction scenarios that might result in hop-scotching, jive talking rabbit people. 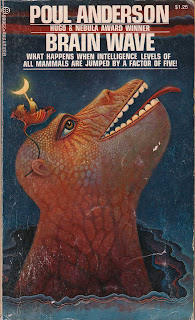 BRAIN WAVE – Poul Anderson
I was living at a tropical field station in Panama for a little while last year and luxuriated in some extra time to read a pile of paperbacks. In the pile was a great little read by Poul Anderson called Brain Wave. This story, one of Anderson’s earliest, was originally serialized in Space Science Fiction in 1953. The basic premise is that all life on earth had evolved while earth was being bathed in a strange type of space radiation that retarded neuronal activity. As the book opens, earth abruptly moves out of the radiation field and the intelligence of all living creatures increases by orders of magnitude. The results of this is that many animals gain a human-level of intelligence (resulting in an awesome scene where African Gorillas go bananas and rebel against the humans!), mentally deficient humans gain “normal” intelligence, and all normal humans become hyper-geniuses. Without going into too much detail, the end product of this could very well be an alternate Gamma World. The cover art for this Ballantine edition is beautiful and eerie; it's by someone named Phil Kirkland, whom I know very little about. 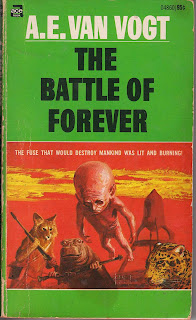 THE BATTLE OF FOREVER – A.E. Van Vogt
I love Van Vogt and I don’t know why he doesn’t get more attention these days. World of Null-A is one of my favorite 1940s sci-fi classics, and spectacularly presages everything Philip K. Dick became a superstar for. The Battle of Forever, from 1971, is one of Van Vogt’s more far out novels. It is set in the far future after the 1000 remaining humans separated themselves from the rest of the planet and evolved into large floating heads with small limp bodies. These 1000 individuals lived for 3500 years in an isolated hyper-intellectual society and had almost completely forgotten about the earth and the physical lives humans used to lead. The book opens with one of these future-humans emerging to explore the earth, finding a plant populated by talking humanoid animals whose ancestors were genetically engineered by the pre-isolation humans. Ahhhh, I love this kind of stuff! Please admire the wondrous Ace paperback cover art by master illustrator John Schoenherr.