The Suspended City of Wiggin's Drop

The World Oranj whitebox campaign had a significant change of scenery when the party merged with a Human Door. In addition to finding the wizard Morton's secret workroom and spellbook, they also found their way to a location I Am the Door insisted was a beautiful city called Wiggin's Drop. When transporting to the Wiggin's Drop coordinates the group was surprised to find themselves in a dark and dusty space behind an underground shrine of an unknown race. Exploration eventually brought the group to a crypt where six dessicated corpses of tall gaunt lily-white humanoids were laid out.

At the urging of the magician Scunibro the group moved quickly to find any way DOWN. Eventually they came to a large silver spherical chamber filled with obliviously spinning ghosts. At the bottom of the chamber was a ladder leading down, down, down. The party slid down the side of the sphere, climbed down the ladder, and found themselves on a swaying walkway - The Great Walkwork - suspended high over an underground sea: 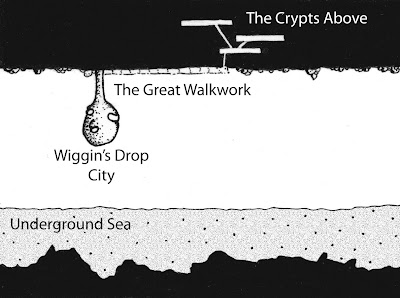 The entire cavern was glowing a diffuse amber due to the carpet of phosphorescent fungus covering the ceiling. I Am The Door pointed off into the distance to a gigantic ceramic teardrop-like structure suspended over the sea and said it was Wiggin's Drop City. End of Session.