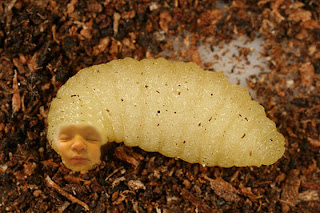 Friday night I ran a group of six friends through a draft of my Gamma World scenario Floating Castle of the Wasp Women in preparation for the Gamex con next weekend. (UPDATE: Read about the con session here!)

The game was pretty much insane… Because I don’t want to reveal too much about the scenario yet, I thought I’d simply describe a few Kodak Moments from the session:

A 15-foot tall humanoid deer was standing on the battlement of a floating castle when he grabbed two 8-foot long human-faced wasps by their necks and fried their brains with electrical shocks emitting from his fingers.
A flying go-kart was careening through space, crashing through a swarm of angry wasp women, while the driver – a gigantic stink beetle – was desperately trying to spray his hymenopteran aggressors with paralyzing flatulence.
A winged woman with radiation-seeking antennae broke down a door to find herself being fired on by a seven-year old boy with a laser blaster. Luckily a flying hedgehog girl was able to wrestle the laser blaster away with her telekinetic powers.
An "average guy" named Bob strolled into a giant wasp brood chamber to find hundreds of tiny maggots with baby faces. Being the average guy that he was, Bob began to mentally leech the life force out of the squirming babies while worker wasps were frantically dog-piling him.
A giant sticky (and delicious smelling) slug with a pulsating Mole of Confusion on his forehead fell from the air and began frantically spitting mucous spit bombs as he was stung to death by the wasp women.

Sadly the slug character was turned into a puddle of mucous during the game. However, Bob The Average ended up with almost 200HP after walking into the middle of the wasp nest and Life Leeching them all. At the last moment, the flatulent beetle character saved the day with one very well placed fart.
A beautiful experience - I can’t wait to again relive the joy and wonder that is Gamma World...!
A few technical comments:
At cons it’s sensible and standard to have pre-generated characters. However, I think one of the most pleasing aspects of Gamma World is the weird and unpredictable mutation combos you get popping up in PCs. In order to keep this fun and unpredictable element in a one-shot game I’m using mutation cards where the players have their mutant abilities printed on little cards in front of them. I achieved this during playtest by photocopying the mutation tables from the first edition rulebook, and having the players excise the bits describing their mutations. This worked great – it sped things up, and no one had to look in the rulebook during play. Before the con next Sunday I hope to make an actual Mutagenesis Deck that players can simply draw cards from. Also, for the session I had players draw lots for their starting weapons and I made up super-simple digest-sized Gamma World character sheets. I’ll post the character sheets for download here in a few days in case anyone’s interested.

A word from James Ward:

Interestingly, after the game the dude who played the mutant slug asked James Ward (the original Gamma World designer) if he thought the Life Leech mutation was too powerful. If you'll recall, Bob the Average's Life Leech played a huge role in the players' victory over the wasps. Here's what Mr. Ward said:

Lifeleech, one of my best inventions.

Over the versions editors (those nasty organizers) have tried to calm down the effects of this mutation. I must admit the ability to keep sucking life points away is powerful. Of course the editors rarely consider that life leechers are the ultimate target of every enemy. Leechers can't take robot hit points. There are really lots of balancing effects to be used on such mutants. I can remember in the games I ran for Gary Gygax and his friends that Gary would kill leechers on sight and not allow them in the village of vigalists. In one group I gamed with they invented anti-life leech paint made from special nanos.

I'm glad you had fun with the game.

Although right after the game I was having mixed feelings about how powerful Life Leech was, in retrospect the game was hyper-fun and I wouldn't change a thing. Gamma World is not about playing a highly balanced strategy game, after all, it's about mutant insanity! I agree with Mr. Ward - the trend to weaken mutations in later editions was a wimp out...