At the SoCal Mini-Con III I ran a session of first edition Gamma World. The game was set thousands of years in the future in a verdant and primeval post-apocalypse where few “humans” remain. For this session players were members of a mutant heavy metal band – traveling "Mohijrim" mystics moving from town to town, overseeing auspicious occasions such as births, weddings, funerals, harvests, etc. Metal Mohijrim seek to fulfill the sacraments of the Lords of Metal: intercourse, inebriation, and providing high quality musical performances to needy populations. 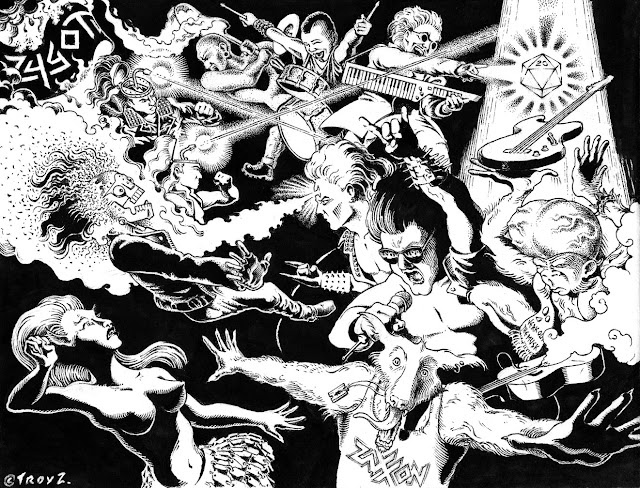 Player Troy Z. drew this highly accurate illustration of the climax of the game! Read recap below!
The PC's band Tipton Scrotus (note that Child-Eyes wants to call the band Van Tipton):

Mamlish and Child-Eyes Tipton: Young heavy metal magic users. Their mother Minerva was the greatest guitar shred master of her generation. They learned the magical arts from their gentle wizard dad! They seek to avenge the murder of their parents and restore dignity to the Tipton clan! Drums and vocals, respectively.

Battus Scrotus: Joker ape-man with gigantic scrotum. When he squeezes his scrotum a paralyzing musk sprays forth form his urethra. Expert at electronic guitar.

Timetrius Finster: This mystery freakus can turn invisible! He bears the battery-powered mini-amp the whole band must share.

Doktor Vernix: Some say he’s crazy, some say he’s just a simple fool. Whatever they say, he’s one of the best keytar synth players in the Gamma World! He also has cryonic powers and telekinesis! And epilepsy!

Giggleface Gynander: S/he is a gay spirited drum player (Tipton Scrotus has two drummers like the Butthole Surfers did in their heyday) with the power of pyro!

The Set-Up:
The PCs are part of the once proud Tipton clan of metal masters. Their parents and mentors were slain, the ancient family instruments were stolen, and now the band seeks to recover the instruments, avenge the deaths of their elders, and return the Tipton dynasty to its rightful stature!

As the game opened the band was down to its last domar, and all they had were crap instruments – coffee can bass, broken acoustic guitar, barely functioning Casio keyboard. They were little more than a pathetic jug band of the apocalypse. While traveling in the northern city of Yeshmiri they found this note posted: 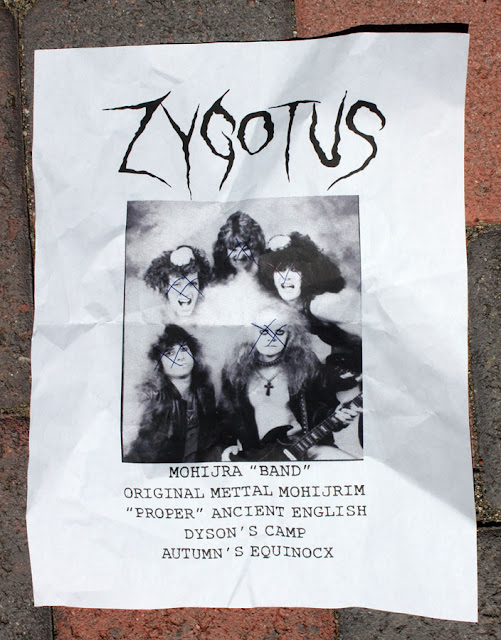 The guitar in the picture was the Gibson once owned by their metal master Mother Minerva. The band headed north to Dyson's Camp - a town of wolf people in a forest if gigantic redwood trees - to find Zygotus. The band arrived a day before the big Zygotus equinox concert was to occur. The PCs spent some time fucking around with the wolf guards, then headed to the inn to pick up wolf babes, play some jug band metal, and maybe score some coke. They ended up putting on a show, befriending some wolf lasses and earning some baksheesh and rounds of fortified pine ale. In one stage antic, rascally Battus Scrotus paralyzed Doktor Vernix on stage with urethra musk emanating from the hole of his broken Samick electroacoustic guitar. After the show Scrotus “rented out” the paralyzed Doktor to the highest bidder for a few minutes of physical pleasure (as the band often does to make ends meet, they said). The taker was huge, almost genetically pure wolf named Lee Loup. (The Rainbow/Dio song “Run with the Wolf” came up). Overall, the band endeared itself to a small portion of the town’s population and was able to get fed, sheltered, and somewhat wasted. The only one who got laid that night, however, was the paralyzed simpleton Doktor Vernix.

The next day the band left the limits of Dyson’s Camp to explore a potential Zygotus encampment. They indeed found evidence of Zygotus, including some guitar strings and Honda Goldwing tracks, but no evil heavy metal bastards. Instead of following the motorcycle tracks, however, the players went back to Dyson's Camp. They decided their strategy was going to be to confront Zygotus on stage at the big equinox festival of the wolves. This surprised me as the GM, because it seemed foolish and dangerous in the extreme. But it turned out to be purely awesome!

With the help of a groupie the band befriended in the inn the evening before, the band talked the stage manager into letting Tipton Scrotus play a few songs on stage before Zygotus’ arrival. Once on stage the band started into rock n’ roll action rounds, where each round is ~4min - the length of a typical rock ‘n roll song (eg. Metallica’s Orion would take 2 rounds). The band worked to entertain more and more of the crowd before Zygotus arrived – the goal being to turn at least 50% of the crowd into cheering fans before the enemy arrived. They were able to do this through their (admittedly lackluster) charisma, musical ability, and some gammatronic pyrokinetic hijinx. Toward the end of their set they broke into a two-round power ballad with vocalist Child-Eyes Tipton (played by blogger Brunomac, by the way) singing about evil that befell the Tipton clan, and how Zygotus possessed the Gibson relic that was rightfully theirs! Zygotus arrived backstage at this point and were furious! Child-Eyes flipped them a magically bioluminescent middle finger and a heavy metal battle royale ensued…

This next scene – the climax of the game - was purely rad. It is one of those moments that makes GMing worth the pain and humiliation of explaining to your normal friends what your hobbies are.

When Zygotus arrived Doktor Vernix used his molecular understanding mutation to determine that the evil heavy metal band was actually a bunch of androids and their leader, Larbchuck, was a cyborg. At that point Zygotus took to the stage and most rudely started pushing Tipton Scrotus around in an attempt to halt their rock.  Of course, some serious violence commenced – but Tipton Scrotus NEVER STOPPED ROCKING. The whole battle took place while Tipton Scrtous were playing an epic prog-metal composition. All of the android bandmembers of Zygotus had laser cannons hidden under their scalps / wigs, and I assumed most of the PCs would be quickly incinerated at this point - ending the game tragically. But the Lords of Metal were truly with Tipton Scrotus for this battle, because I kept rolling crap, 3… 7… 5…, for the robot attacks.  Once I even rolled a 1 and the Zygotus bass player ended up shooting himself with his own damn laser beam. The android leather daddies were complete buffoons, apparently! Meanwhile Larbchuck, the screaming cyborg lead guitarist of Zygotus, was gearing up to shoot liquid-light radiation beams from his eyes. Charva Chynex (played by blogger Nick B.!) used his light manipulation powers to defuse the beam. Then Mamlish the Metal Wizard cast an ajna Radionic Fireball spell and melted the cyborg’s face off (see illustration) to reveal to the people of Dyson’s Camp that Zygotus were not authentic Mohijrim – they were computronic purveyors of False Metal.

During the battle Doktor Vernix tried for several rounds to telekinese the Gibson guitar from Larbchuck’s hand, and failed. Finally he rolled a white-hot 20 (as shown in the illustration) and was able to float the Gibson out of the hands of the cyborg into the hands of Battus Scrotus in the middle of Scrotus’ left-hand tapping guitar solo. With his right hand, Scrotus then grabbed his electric cricket bat, rolled a sweet sweet natural 20 and knocked Larbchuck’s head off, sending it flying over the audience.

Lots of other kooky stuff happened, but nobody reads long session reports so I won’t bother relating it all to you… Needless to say it was a super fun game for me to GM and the players said they liked it too. For me the first part of the game where the band was cavorting about with the locals was a tad slow for my taste, but some of the players said they really loved it.  “Town & Tavern” preludes simply appeal to some people and not to others – it’s been that way since 1974, I’m sure. I think for future con sessions, however, I might plan better to downplay Town & Tavern action so players can get to the exploration and violence more quickly. Damn, I had tons of other material - NPCs and localities - for this adventure the players never touched.

One stylistic element I experimented with for this game was giving a longer background color spiel than I usually do for one-shots. I spent 10-15 minutes describing the world, context, heavy metal traditions, etc. I personally like hearing GMs give colorful and creative intros, but I also know at a con game there can be a risk of turning off players with short attention spans. I think it turned out okay this time, but I never got direct feedback from the players about it.

Anyway, the game was cool. Maybe I’ll run a follow up at Orccon in February. I’m skipping out on Gateway this year because of the new baby.

PS: Click here to read Brunomac's recap of the session.