How Sleep Spells Turn Adventurers Into Sadists and Executioners 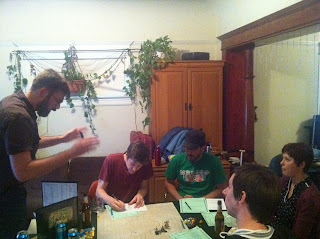 I got some emails today from players in my whitebox OD&D campaign. These are snippets regarding our session on Sunday (picture above):

Mackie the Fighting Man: By the way, Michael the Goblin is probably my favorite creature from our journeys so far. He really made me question what I'm doing with my life as a warrior...I still feel guilty for sending him to his death. :(

Cookie the Fighting Beast: P.s. I've also been reflecting on my role as a warrior! Did Michael have a family, what were his passions.....?

Monolaba the Cleric: I still have a few of his fingers if you guys want a little memento.

Franklin the Cleric: Franklin may have had one swig of wine too many and apologizes for abusing Michael and throwing him to a gruesome death (so Michael would have us believe anyway). But let us take comfort in the fact that he is now reunited with Bort, his other unnamed late comrades, and perhaps even his amputated digits. Oh wait, Monolaba still has the fingers? Anyway, it's when we get overly sentimental that we will end up surprised by a tentacle monster with Michael on the saddle.

This exchange is referring to the party's interactions with a goblin they captured named Michael. At one point the party was holed up in a storage room with an unknown number of goblins waiting outside the shut door. The party interacted a bit through the door with Michael, the goblins' spokesman, before deciding to rush out with the magic user ready to cast a sleep spell. When the group swung open the door they indeed put most of the goblins to sleep, killing those that remained standing.

After the battle the party went through the whole throat-slitting ritual that a sleep spell typically entails. They kept one goblin - Michael - as a prisoner. We did a whole episode of first-person roleplaying as the party interrogated the goblin and bickered about what to do with the pitiful creature. The weirdo child chaos cleric Monolaba even cut off some of the goblin's fingers to show how "serious" the group was. Eventually Franklin - a cleric of the Zymosian Time Demon - threw Michael the Goblin through a door full of grasping hairy tentacles. I made Franklin change his alignment from Neutral to Chaotic, by the way.

I don't know about you, but I still get heebie jeebies when PCs mutilate and/or execute prisoners in a game. I know, it goes down all the time, but I still feel weird when it happens. And it almost always happens because of a sleep spell.

A sleep spell is really the perfect instrument for pushing adventurers into uncomfortable ethical dilemmas. Sleep only affects the weakest little enemies - smelly little confused kobolds or grimacing goblinoids wielding rusty butter knives. What does one do with a pile of snoring kobolds? It's not practical for a party to drag along 8 terrified prisoners while trying to carefully explore a dungeon. So, yeah, in their minds players have to trump up the breadcrumb sins of these pathetic dungeon vermin to justify slitting their throats. And what about the one kept as a prisoner? Is it okay, or even fun, to torture it for information? Hold it for ransom? Hold it hostage? If you let it go it will bite your toe and tell its friends! What would Jesus do?

Sleep... a fucking genius instrument for roleplaying, warping kids minds for over 35 years. Let's rejoice that Gygax and Arneson made Sleep instead of something lame like Kill.