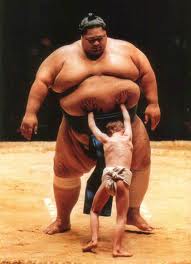 Austin Jimm, proprietor of the fantabulous Contemptible Cube of Quazar, posted his simple house rules for grappling over at the Knights & Knaves Alehouse. Jimm's rules are based on a combat example published in the Summer 1975 issue of The Strategic Review. Thanks Jimm for rewriting these rules in such a clear way. I think I like this better than what I've been doing (i.e. a to hit roll followed by a dex check) because it allows for dog piling!

Grappling:
Any character, or group of characters, may attempt to grapple and subdue an opponent. This is accomplished by having the attacking character, or characters, roll a normal “to hit” roll against the target. The hit dice of all attackers who successfully hit the target is totaled, and a number of d6 equal to this total is rolled. The target must then roll a number of d6 equal to his own hit dice. If the attackers' roll is greater than that of the defender, the target is considered pinned and may be disarmed, shackled, bound, knocked-out, or otherwise subdued. If the defender's roll prevails, he has thrown off all of his attackers and they must spend one combat round recovering as if from a fumble. If the dice are tied, they are struggling, with the defender still on his feet, and another set of grappling rolls will be made on the next round. Any additional attackers who score a hit may add their dice to the roll.