So my web log productivity has been pretty spotty this April. Why? Mostly I’ve been hammered with work. Also, my band Sausage Grinder had its two big CD release shows over the last two weeks.

The weekend before last we did a show at Don the Beachcomber, a classic 1960s tiki bar in Huntington Beach. This place has the best old school rum cocktails in Orange County, and possibly in the whole L.A. area (toss up with Tiki Ti and Trader Vic’s). If you want to experience authentic 1930s exotic cocktails served up in beautiful ceramic tiki mugs, you must check this place out. Last weekend we did a show at the famous California Institute of Abnormal Arts in North Hollywood – a singularly charming freakshow club. We had guest performer Senor Stretchy Skin perform during a few of our instrumental numbers. Stretchy devised a zither with a meat grinder on it and ground sausages on stage to a dancing marionette made of nuts and bolts. He also put 100 clothespins on his face while we fiddled up Stovepipe Blues. That’s entertainment, yesss….!

On the gaming front I worked up my Homunculon post into an article and submitted it to Fight On! along with a few illustrations. Hopefully it makes it into the next issue!

Also, last Friday we had around 20 friends over for our mostly-monthly board game party. I was giddy glad to try out the new Dungeon Lords board game for the first time. The concept of this game is that each player manages a dungeon and has to periodically fight off groups of trespassing adventurers. Managing a dungeon is no mean feat – it includes paying tunnel taxes, following building safety codes, hiring and feeding monsters, watching your Evil-o-Meter rating (mo’ evil means = attracting tougher adventurers), and directing your army of worker imps to help keep the dungeon running. I loved this game - the theme, art, and play experience were great. Despite the fantasy elements, this is a hardcore eurogame, combining worker placement, resource management, second guessing of other players’ moves based on turn order, etc. It also has the typical multi-player solitaire / victory point feeling of most eurogames. This game is very complex and rule heavy. I would definitely categorize it with euros likes Caylus, Agricola, and Power Grid in this respect. So, if you don’t like those games, you’d probably hate Dungeon Lords. Luckily the rules for Dungeon Lords are very clear and well written. Play time for us was over 2.5 hours (with 2 of 4 players being newbies). One of the downsides of Dungeon Lords is that you need exactly 4 players for the best experience – if you have only 2 or 3 players you have to have “dummy players”, which sounds pretty lame. Overall, a pretty fresh and cool board game I’m keen to play again. 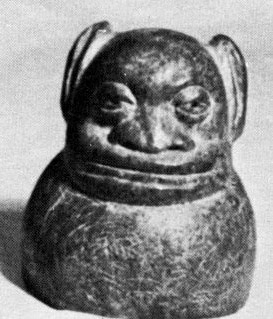 C. A. Smith: Too early for his time as a tiki mug designer...?
I wish to sip demerara nectar from the neck of Tsathoggua!

Email ThisBlogThis!Share to TwitterShare to FacebookShare to Pinterest
Labels: board games, music