Whitebox Sunday - Meet the Syndaens of the Ceiling

Gaming has slowed for me since my first baby arrived this summer. The two D&D campaigns I’ve been running have pretty much been on hiatus. No longer!

On Sunday the L.A. whitebox gang reassembled to continue the scary adventure that’s been on pause for 6-7 months now. It was a nice warm, sunny December afternoon when we gathered in an old victorian near Koreatown, had some French pastries, mulled wine, smudged little brown books, lead minis, and the old mint green character sheets. 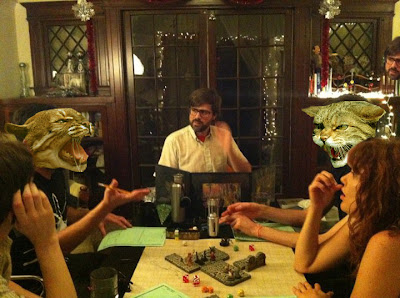 The party spent the session traversing a catwalk suspended over a large viscous, sparkling underground sea thousands of feet below. The ceiling of the cavern is covered in phosphorescent fungus. In the distance the ceramic city of Wiggin’s Drop hangs from the ceiling.
The party met their first Syndaens – the all-female caste of laborers who tend to the fungus fields on the ceiling of Wiggin’s Rent cavern. The party stumbled upon a mature 8’ tall Syndaen, Naias, and her two 4’ tall clones. The triad was fighting insectoid Harvester monsters on the ceiling. Syndaens wield boomerangs to protect themselves while working the fungus fields. The party decided to join the fight against the Harvesters, afterwards making friends with the Syndaen triad.
It turns out the Syndaen’s were on a quest to extract a mythical male of their race from an ancient and isolated ceiling shrine overtaken long by foul goblins. (I love goblins.) The party joined up to help the Syndaen’s on their quest, and the session ended as the group found a back entrance to the shrine where a wall had been damaged.
I resumed using a DM screen for this session, which is something I've been trying to get away from for a while. I’m still undecided about DM screens. I feel like they put up a psychological barrier between the DM and players, but on the other hand they’re really good for hiding maps and queued-up minis.
An awkward subject came up after the session. Several other folks have expressed interest in joining in this game, but we were all concerned it might be problematic for the group to get too big, both in terms of too many players slowing the game down, and also in terms of the increased difficulty of organizing lots of different people with challenging schedules. We were talking about capping the group at six players... It's sad to exclude fun and interesting people though... Need to think on this more...


Here’s what it looks like when someone casts a difficult spell: