This past weekend I attended Orccon, one of the big gaming cons in Southern California.

First of all, I want to thank everyone that played in my Gamma World and OD&D/Spelljammer games. There's nothing more satisfying for a DM than to see returning players and to hear cheers, laughs, and applause during and after a game. I was also flattered that my games were overbooked with alternates, although it was disappointing to have to turn people away from Gamma World.

So, yes... I attended the con on Saturday and spent about 15 hours gaming, with short breaks for pizza and beer.

For the morning session I played in a game of Mouse Guard. I like the comic and wanted to try the RPG out. I had fun, although we spent much of the session talking about rules as opposed to pretending we were mice. After playing for over 3 hours our team managed to (1) get a cart unstuck from the mud (I can't believe how many dice rolls this trivial task took, christ), (2) ask around town for a friend mouse (without finding him), and (3) have an argument with a group of NPC mice (again, at least an hour and 15-20 dice rolls to resolve this verbal confrontation with NPCs). The game mechanic was indeed clever in how it forced the players to produce a character-driven narrative. But at what cost? The slowness of the games was pretty frustrating, and I don't think it was all the GM's fault. Although I did have a good time, I think I'd have to be prodded a bit before trying out the Burning Wheel rule system again.

For the afternoon session I ran a game of first edition Gamma World. It was a follow up to my SoCal Minicon game from last summer, where the group played a troupe of mutated heavy metal musicians. In this session the group invaded a rusted out oil tanker that was swarming with mutated rat punk rockers. The players found the punk king, snorted his coke and smoked his weed, humiliated (and murdered) his band, turned the rat punks on to metal with the help of a muttonchopped rocker named Lemming, and defeated an evil psychic brain that had been lording over the rat punks. The game ended up being nasty, despicably violent, and riddled with drug abuse and poor life choices. The session had a happy ending, though, when the band's half-chimp triangle player awoke from a magic-induced coma to be reunited with his illegitimate robitussin-addicted son (I wanted to get in some edgy modern psycho-emotional roleplaying, you see). I'm always grateful to get a table full of awesome players like this. Super special thanks to player Troy Z. for presenting me with the original artwork he created depicting the climax of the previous session! Wow! 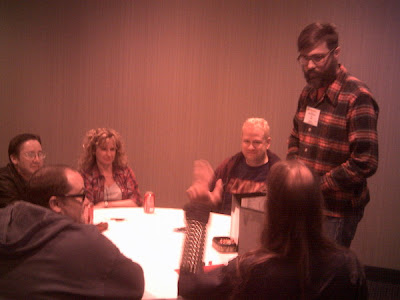 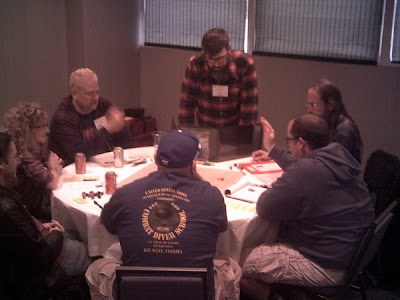 (Thanks to Louis Garcia for photos of the Gamma World session)
For the evening session I ran an OD&D / Spelljammer hybrid game with 3rd-5th level characters. You can CLICK HERE to read the basic scenario, so I won't repeat it in this post. For the first part of the session the players flew their rickety space tower around the outside of the asteroid, exploring possible entry points. They opted to enter through the nostril of a transplanted supergiant face on the dark side of the asteroid. They explored some of the interior of the asteroid and met one key personality who had been stuck on the rock for many years. Through a combination of luck and cleverness the players ended up doing fabulously, accomplishing their primary mission of uncovering some ancient starfaring navigation scrolls from the interior of the asteroid. There was a super cool close-call climax involving a furious vampire hobbit and dwarf tossing in space.

After the game the players seemed enthusiastic, which was gratifying. One guy who had never played OD&D before said he liked the creepy atmosphere and asked "what happens in the rest of the adventure". I didn't know what to say - the players saw less than 10% of the interior of this particular asteroid. There was no script or "adventure path" for this game - the story was made by the players and the dice. Great work, Team Xylbocx! Thanks again for the fun Saturday night!