Remember the good old days, when adventures were underground, NPCs were there to be killed, and the finale of every dungeon was the dragon on the 20th level? Those days are back. Dungeon Crawl Classics don't waste your time with long-winded speeches, weird campaign settings, or NPCs who aren't meant to be killed. Each adventure is 100% good, solid dungeon crawl, with the monsters you know, the traps you fear, and the secret doors you know are there somewhere. - Goodman Games' Dungeon Crawl Classics Website 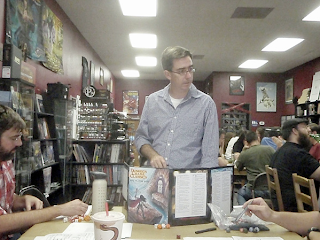 Me on the left and Joseph Goodman DMing.
Photo by Phil McCrum.
Last Sunday I had the opportunity to sit in on a playtest of Goodman Game’s upcoming RPG Dungeon Crawl Classics. The game was run by Joseph Goodman himself, and was organized by the Dead Gamers’ Society meetup. Before and after the game I had a chance to chat with Joe about the game a little bit. Sooo… here I’ll try to lay out the scoop on DCC.

WHY PUBLISH ANOTHER D&D-LIKE FANTASY RPG?
I asked Joe point blank why he wanted to be the publisher of yet another D&D-ish FRPG, and how he thought it would fit into the current market which is already filled with a confusing plethora of retroclones, quasiclones, semiclones, etc. His idea is that DCC will be aimed at D&D 3e / d20 players who want a more simplified version of the out-of-print systems they enjoy. All of the feats, skills, etc. have been stripped out of DCC to provide a lean and easy FRPG. Joe said Goodman Games would probably not be specifically targeting the retrogamer crowd with DCC. I must say, though, the game felt and looked a lot like AD&D – Joe even said he is commissioning some of the classic TSR illustrators like Easley and Otus to do art for the game. He estimates the game will be formally released in about a year.


THE DEEPER MOTIVATION BEHIND DCC: APPENDIX N...?!?!
According to Joe, his personal motivation behind DCC is to offer an RPG that can, as closely as possible, emulate all of the books presented in the Appendix N of the original AD&D Dungeon Masters Guide. Joe said he is systematically reading every book in Appendix N in order to formulate the game mechanics for DCC. One specific example of this is turning. Joe replaced the traditional cleric’s turn undead ability with a more general turn unholy in order to more closely mirror turning as envisioned Poul Anderson and Lord Dunsany. Another example is the totally revamped magic system where the success and/or side-effects of spellcasting can be unpredictable:


SPELLCASTING MECHANICS
From my playtest experience, it seems like the biggest difference between DCC and other similar RPGs lies in the spellcasting mechanics. Vancian memorization has been done away with and spellcasters have access to any of the spells appropriate to their level. When casting, however, the player must roll a d20 to gauge how successful the spell is. For example, a cleric needs a minimum roll of eleven (including modifiers) for a spell to work at all. The higher the roll, the better the spell works – and, yes, in the rulebook each spell is presented as a page-long table of effects-by-die-roll. The clever mechanic here is that at the beginning of a session the spellcaster starts with a positive roll modifier (e.g. my cleric started with a +4). Each time a spell is cast the modifier is decreased by one, so spells become less and less likely to be effective as more spells are cast. This turned out to be a cool system that was really fun to play. In fact, I might try to steal part of this system for clerics in my own home game!

I didn’t play a wizard, so I’m not totally clear on the specific mechanics for the class, but each spell cast by a wizard has potentially nasty side-effects that must be assessed at each casting. At one point in our game, for instance, a wizard cast a spell, rolled on the side-effect chart, and discovered he had to cut off a pound of his own flesh to sacrifice to a demon. The player decided to carve off one of his buttocks for this purpose. This is weird and grisly stuff… Hardcore self-mutilation. I found it to be kind of shocking, actually. I did notice that the wizard players started getting a little exasperated as the game went on, but I thought it was cool.

VARIOUS MINOR RULES NITTY GRITTY
DCC has ascending armor class as in d20; Six abilities (3d6 down-the-line): Strength, Agility, Stamina, Personaility, Intelligence, and Luck. Luck points can be burned to influence die rolls, but may then result in other negative modifiers as the game progresses. I wasn't clear on how saving throws worked - I just rolled when Joe told me to. A natural 1 or 20 during combat results in a roll on either a fumble or crit table of dramatic effects. The game has the typical FRPG classes (warrior, thief, wizard, cleric), each with its own specialized character sheet. 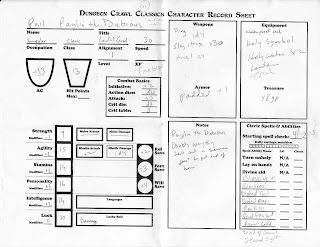 My cleric character inherited from an earlier session.
Note the spell tracking box in the lower right.

HOW WAS THE PLAYTEST?
Joe took us through a scenario called something along the lines of Castle of the Emerald Wizard. I think he was surprised how our group "won" the module in less than 2 hours. The adventure pretty much lived up to the DCC blurb at the top of the post. Based on the portion we mapped, it seemed to be a Type B Linear Dungeon, with a series of guardian monster battles leading to a climax at the end where you fight with the boss (The Emerald Wizard), rescue the prisoners, and march away with pockets full of gems. It was a little disappointing that there were no talking NPCs, no cool items or treasures (beyond gems), and no interesting mysteries. The only way the monsters interacted with the players was to fight-to-the-death. I was also surprised that Joe read room descriptions verbatim off of paper printouts - I've never seen an experienced DM do this before. All-in-all this adventure felt like a railroaded chain of combat encounters, which isn't really my preferred gaming style. We won the module fairly quickly by magically bypassing the main path to get to the end. [UPDATE: Red Joe's comments on this HERE]

The session was a lot of fun and I had a great time, but I think running sessions like this kind of undersells DCC. This is clearly a robust and exciting ruleset with its own unique flavor deriving from the interesting spellcasting mechanics. Given that Joe sees DCC as an Appendix N emulator, I don’t completely understand why he chose to run the type of adventure he did. When Joe was name dropping Poul Anderson and Lord Dunsany before the game I was getting pretty excited, but the experience he delivered was more like an 80s Nintendo game or AD&D as run by a 13 year old in 1983 (not that there's anything wrong with this, mind you). And I'm sure Joe would make no apology for this, based on the promotional blurb at the beginning of this post. I think, however, that this approach is what led one of the players to give a kind of back-handed compliment after the game "Well, I think this would be a great system for running quick one shots!" I actually felt DCC was much better than this. The novel magic system in DCC gave the game an unpredictable and sinister feeling that really was evocative of weird mid-century fantasy fiction. I suspect I'll pick up a copy of DCC when it's published, if only for the magic system, although I predict the whole game will be quite good - possibly outstanding.

Well, Joe knows the market much better than I do, so hopefully his strategy of marketing DCC to alienated d20 players as an engine for running combat-chain dungeon adventures works. There's a lot more to DCC than that, though, and it would be nice to see the game enjoyed by Appendix N fans who would appreciate it. No matter how good the game is, however, I predict it might be hard to get more literary-minded FRPG gamers to give the game a whirl with a name like Dungeon Crawl Classics.