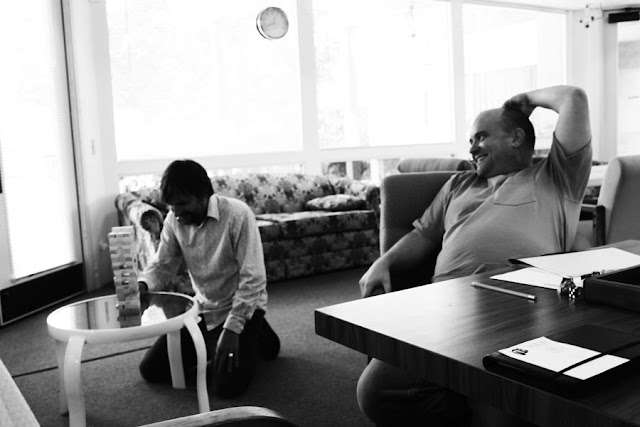 DM Telecanter cackles as player misfortune manifests in a tower of Jenga blocks.

Ha ha! A great weekend! SoCal Minicon 4 was damn awesome. It was twice as big as last year and everyone I talked to said they had a blast and want to come back in 2012. We had a few people this year fly in from back east and the midwest, which amazes me.

The first game I played in, on Saturday morning, was Steve Perrin's SPQR game. SPQR = Steve Perrin's Quest Rules - it's essentially Steve's house version of Runequest. The table was full of great players. For the first ~45 minutes or so Steve explained the historical background of his imaginary continent with the aid of large and heart achingly lovely hand drawn maps. It was great. I love grand introductions to sessions when they're done right. The adventure was an overland journey to locate a wizard's tower and I played a naive, claustrophobic, agoraphobic farm lad on his first foray. I spent a few pleasing hours in the game, which included a battle against three manticores who were trying to eat the party's horses. Sadly I had to drop out of the game early and leave the minicon for the day because of a family matter. I hear the group made it to the tower before dinner time. Nice work!

On Sunday morning I played in Telecanter's fine fine Swords & Wizardry session. If you read his blog (and you should) you know he is prone to frequent strokes of creative genius. This tendency of his was well on display in the session. The set up was that the party members were all infected by The Red Plague while staying in an inn, and so were inclined to set off together to the Redoubt of the Red Wizards to find a cure. The Red Wizards were reputed to have created the plague perhaps ~100 years earlier, you see. A sticky bit was that the plague causes infected souls to become hypersensitive to stress and anxiety. So sensitive, in fact, that if a victim is pushed too much she will go berserk. The brilliant game mechanic for this fragile state of sanity was Jenga. Whenever violence or other major stress happened in the session a player would have to draw out a Jenga block. Clockwise around the table the draws went. Every melee round. Every curse uttered. Every gasp of frustration from a player. We all knew if the blocks fell the party would go insane and all would be lost. BRILLIANT FUN! We spent much of the session acting like a bunch of plague-ridden Marcel Marceaus in a freezing cold invisible dungeon being attacked by crawling bones, ticks, and hoodoo stranglers, so there was lots of Jenga action. Of course we got a firehose in the face of all kinds of other creative telecanterian strokes, some of which I recognized from his blog writing. Clerics drawing bones (dominoes) for prayers, apologizing assailants, weird homespun ensorcellments. Halfway through the game Mobad declared aloud that it was the weirdest dungeon he's ever played in. A beautiful game, great fun, a privilege to play. (We won, too!)

For the Sunday afternoon session I ran a game of Dungeons and Dragons. Because a couple of the players had previously played in my Orccon Asteroid Crypts of the Xylbocx Starcult game I decided to make this session a direct continuation of that adventure. I'm a bit conflicted about how much I want to talk about the content of the session. I might like to run it again for another group so I don't want to give too much away. The location the players explored was the CACODAEMON TRANSLUCENT PLANETOID. This thing is a great spherical cyst of a few miles in diameter bearing a giant luminescent cacodaemon embryo at its center, much like a small sun lighting a small hollow world. On the inside shell of the cyst were some localities settled by various interests for various reasons. The adventuring party eventually ended up spending much of the session exploring the Cacodaemon Cyst Yolk Mine where hobbit miners drain and condense embryonic blood of the cacaodaemon from the gelatinous white yolk. (The cacodaemon yolk forms a small mountain range on the inside shell of the cyst.) I was privileged to have a group a super fun players and I want to thank them all for playing in my game. I am flattered that Telecanter wrote up a short recap of the session HERE.

There were many other sessions besides the three I was involved in. Here are pictures to prove it! (Many of these pictures were taken by Chainsaw, as credited). 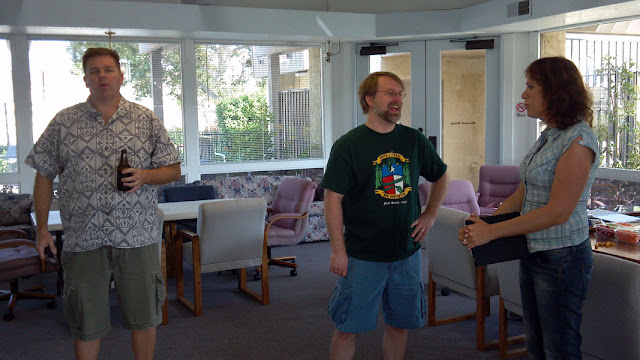 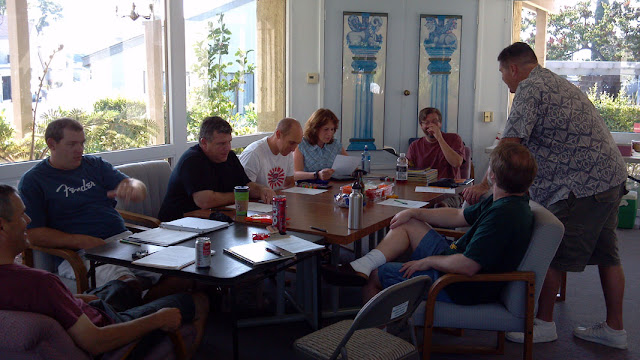 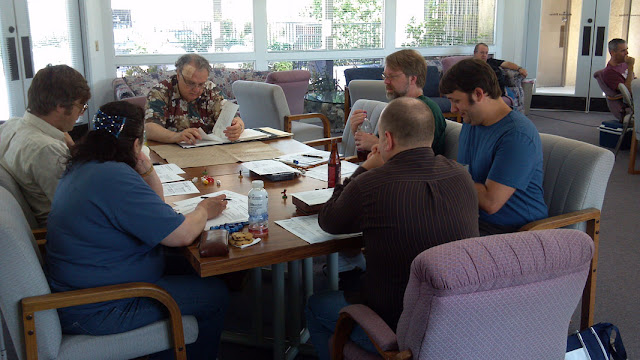 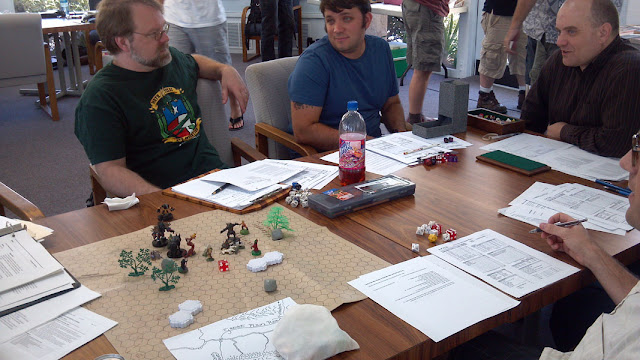 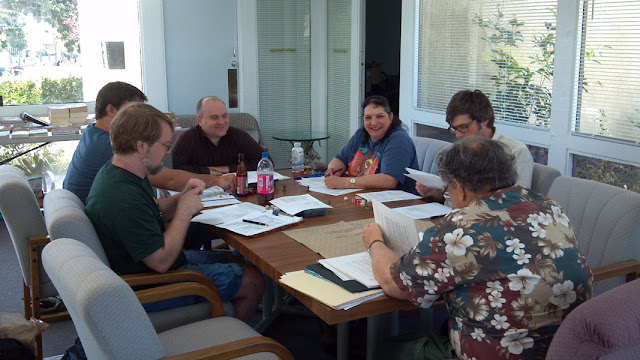 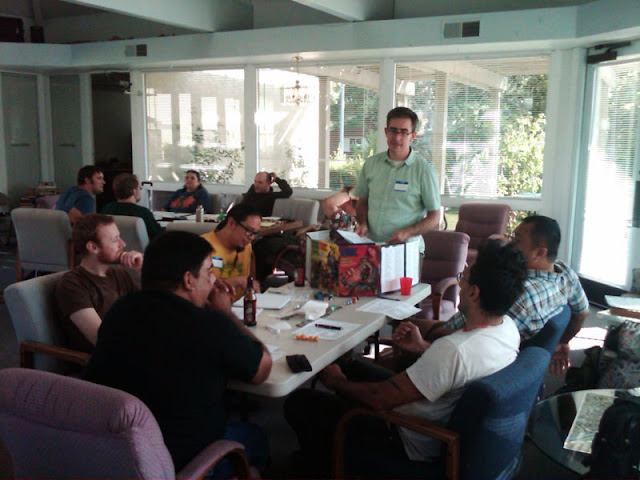 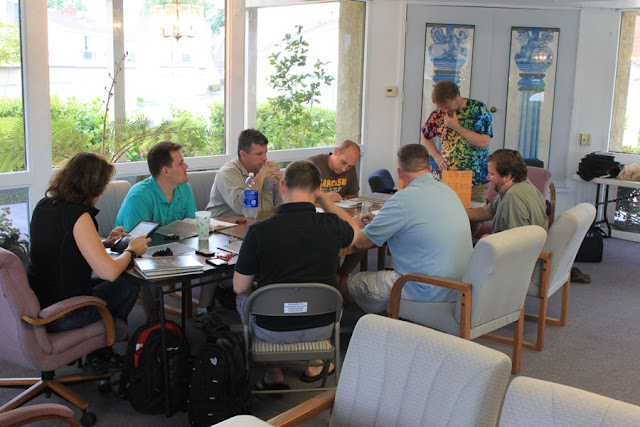 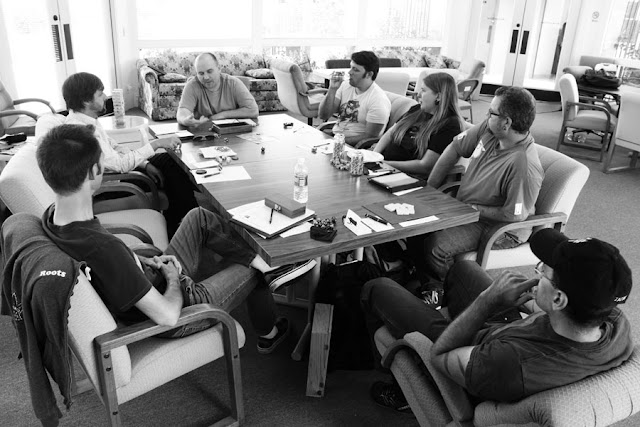